Google AdWords customers can now better target mobile device owners via an updated ad experience within the Google Maps app on Android, iPhone, and iPad, Google announced today. This news follows a recent update to the Google Maps app, which previously saw a number of changes and additions, including an updated user interface, integrated traffic reporting, Zagat reviews, changes to how business ratings display, and more.

In the updated Google Maps application, advertisers can now target Maps users after they’ve performed a search. Here’s how it works: after a user performs a keyword search in the native app, a box appears at the bottom of the screen which includes a title, text and link to get directions for a relevant business. Users can also tap or swipe up on this box to see more information.

In the example Google provided today, a user searches for “gardening shop” and an ad appears below for a gardening supplies store nearby their location. 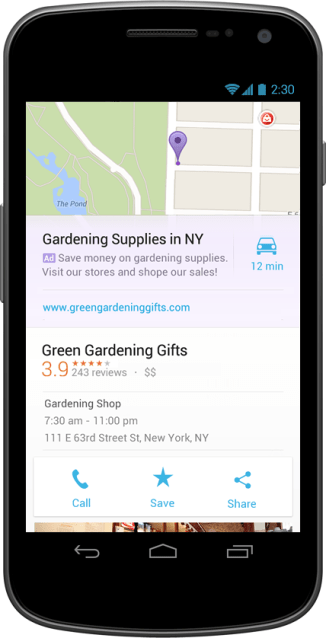 When clicking (err, tapping) on that ad, Maps users will also be able to view the business address, phone, photos, reviews and more – just like a regular business listing would show. However, the listing is preceded by a small purplish icon reading “ad” to indicate that this is, in fact, a paid placement. The icon on the map is also purple, as opposed to the standard red.

Some actions a user takes are free, including saving business information for later, sharing a business listing with a friend, or starting navigation, for example. Meanwhile, others are paid. Advertisers who want to enable the initial “get location details” click, the “get directions” option, click-to-call’s, and clicks on the ad headline, have to pay, says Google.

Reporting is available for both types of actions, and can be filtered by choosing the “click type” in the reporting screen.

To get started, Google advises advertisers to add  location extensions to their search campaigns or create an ad with AdWords Express. Ads also have to be configured for mobile devices and on Google search partners in the AdWords settings.

Prior to today’s change, Google’s Map apps on iOS and Android had been updated with a new interface where business listings appear at a box a the bottom of the screen. Users can swipe up on these in order to flip through them one-by-one, or they could just tap on the “list” icon next the search box at the top of the screen to see a full list of nearby results. Now Google is making it so advertisers can pay to be that “first click,” so to speak, which could boost a business’s exposure in terms of attracting foot traffic to their store, or reaching those in search of something in particular (e.g. sushi, and not just restaurant).

Google first previewed its updated version of Google Maps at this year’s I/O developer conference, when it announced new plans for AdWords location extensions, which would enable ads beneath the search box and on the map on the web, too.

Maps has long since been used by Google advertisers, but this year’s user interface overhaul changed the way ads will display, and what sort of options advertisers can now pay for and track.