Food52, a crowdsourced cooking website co-founded by former New York Times food editor Amanda Hesser and Merrill Stubbs, is today making the move into e-commerce with the launch of an online shop called Provisions. Here, Food52 visitors will be able to browse through and purchase a variety of products, organized into themed collections, like “Rooftop Party,” or “Freshly Picked: Plums,” for example.

Like many of the efforts in the new e-commerce landscape, including especially with fashion-focused sites like Refinery29, Monogram, Thrillist.com, BureauofTrade.com, and others, Food52’s Provisions is centered around blurring the lines between content and commerce. What that means in the case of Provisions, is that the store is not a standalone website under a separate domain, but lives right underneath the main Food52.com roof. In addition, when users are browsing through the products for sale, beneath each item they’ll see photos and links to related materials elsewhere on Food52, including articles, how-to’s, and recipes.

Explains Hesser, “if you wanted to make a cocktail, you might need a cocktail shaker, you might need a how-to on what kind of ice you need, how to crush it, or how to make a sugar syrup for your cocktail. You also may need glass tumblers to serve your cocktail in,” she says. All these suggestions – product and otherwise – will be shared not only beneath the item on the Provisions site, but in time, across the entirety of Food52.com. 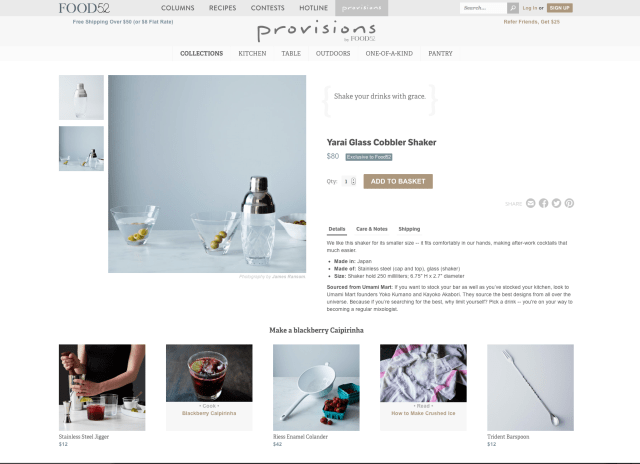 The website, for those unfamiliar, was founded back in 2009, with the goal of building up a community of those who are passionate about cooking, but not necessarily professionals. The site arrived at time when the food recipe space made it difficult, if not impossible, for new entrants to compete, as giants like Allrecipes.com dominated the market. Meanwhile, though there was a growing network of food bloggers emerging, individual blogs also found it hard to gain traction on their own.

What Hesser and co-founder Stubbs did, instead, was to give those voices a home through a combination of crowdsourcing and curation. “Our site has a strong tone, editorial voice and visual voice. We’ve proven that’s the key to making crowdsourcing effective and scalable,” says Hesser. The company funded the site through an advance from a book deal with Harper Collins, then later a seed round of $750,000 in funding in 2010. Earlier this year, Food52 announced a $2.75 million Series A, with the goal of funding its moves into e-commerce.

Hesser notes that Food52 has actually long since included an online storefront of sorts, however. But she says it was more of a placeholder – a signal to the community that this was an area they would eventually build out further. At first, the store would refer subscribers to other sites selling interesting products related to cooking, but not as an affiliate stream of revenue. Last year, Food52 began phase two, which involved experiments with offers tied to the site’s content. These offers ranged from ingredients to trips to Italy, to give you an idea. Then, over the past couple of weeks, Food52 launched Provisions into a private beta tested by tens of thousands of its more regular users, ahead of today’s public debut. 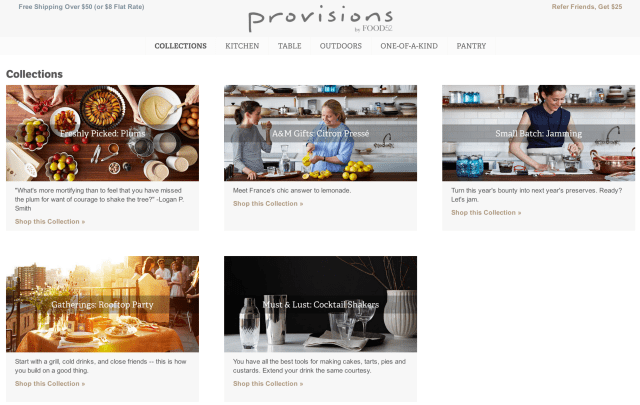 At launch, Provisions includes around 100 products selected from over 30 merchants, and more will be added regularly through the addition of themed collections. As with the other content on the site itself, Food52 leaned on its community to build up its online shop as well. The company encouraged users to begin pinning their favorite products to Pinterest, and then the company curated those suggestions into what’s now the online storefront Provisions.

Users were incentivized for their efforts on Pinterest by winning the product, if it ended up being chosen for the shop. This is a similar model to what Food52 does to collect recipes – it runs weekly themed contests, where winning recipes are featured on the site, and winners receive some sort of product prize – like the OXO gift packages awarded at present. This model, aimed at encouraging regular pinning, will continue after Provisions’ launch, Hesser says.

Food52, of course, competes with a number of online cooking resources today, from recipe startups to big media-run online destinations. But the company has several sources of revenue, in addition to its new online store, to sustain it, including ads, partnerships with companies like Whole Foods, a paid iPad app, and various book deals (including its own upcoming imprint). The company doesn’t currently discuss revenue, as it’s still in the growth phase, but Hesser characterizes it as “financially sound.”