In May, Google announced that its online and mobile payments solution Google Wallet would be integrated within Gmail in the coming months, but no exact time frame for the rollout was given. Now, it appears as if more users are gaining access to the Google Wallet in Gmail feature, as invitations are hitting Gmail inboxes.

These invites are arriving in Gmail’s new “Updates” tab. (Update: Originally, we were hearing they were arriving in the main inbox, but Google informs us this is not the case.)

Anyway, below is the example of what the invite looks like: 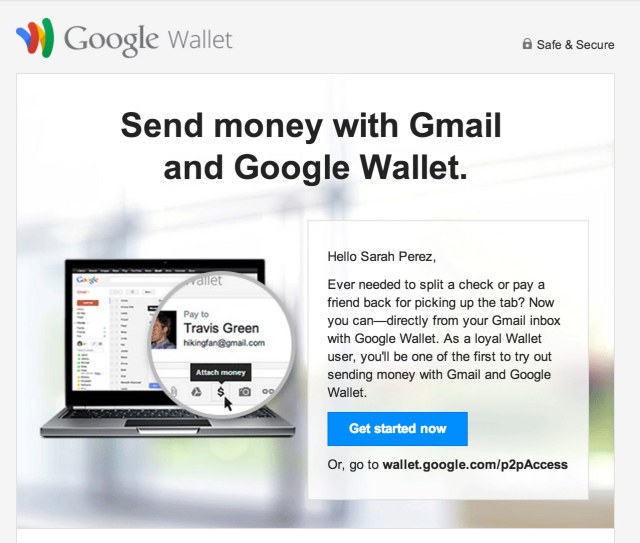 For those unfamiliar, Google Wallet is the company’s payments platform and answer to PayPal, which allows users to store their debit and credit cards in a secure service for easy access. Wallet can be used when shopping online, including on e-commerce websites, and within Android applications where virtual goods, in-app purchases, and even physical goods and services, are sold. On Android, an NFC-based Google Wallet mobile app allows for transactions at supported point-of-sale and other NFC-based terminals, but adoption there is limited due to mobile operators’ restrictions enacted because they invest in their own competitor called Isis. (Greed is why we can’t have nice things, folks).

With the announcement in May, Google informed us that it would soon offer another way for the payments service to be used – that is, within Gmail. A new dollar sign icon in Gmail will appear, allowing you to “attach money” to your message. The icon sits near the attachment paperclip icon and Google Drive icon for attaching files from the cloud in the new “Compose” experience in Gmail.

Since early beta testers could invite others to Google Wallet for Gmail by sending money, some came up with ingenious ways to invite others by sending small amounts – like a penny – to those who asked. But most of us simply waited for Google to send the invitation after registering our interest. These invites are arriving first to Google Wallet’s early adopters, before the feature is more broadly rolled out to all of Gmail’s user base.

After clicking on the “Get started” button in the invite, or heading directly to  wallet.google.com/p2pAccess, you’ll have to confirm your identify in order to comply with U.S. financial regulations before being able to use Google Wallet in Gmail. This will involve providing your date of birth and last four of your Social Security Number, Google explains.

This verification process takes only a second or two, and then the new “attach money” icon will appear when you return to Gmail. (Note that users who have declined to upgrade to the new “Compose” interface in Gmail won’t have the option to send money until they make that switch.) 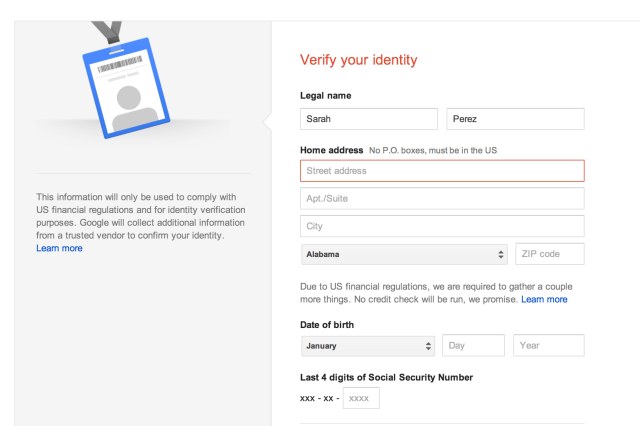 We reached out to Google to ask for more details as to the progress of the rollout itself, and the company explains that the invites arriving now are going to those who had previously signed up to receive the next version of Wallet at www.google.com/wallet.

It also appears that several users have been excited enough to post about their invitation’s arrival on Twitter. (I’m about to do the same.)

Google Wallet has hit some hurdles in recent months, following the departure of Google Wallet head Osama Bedier. Google also scrapped plans to launch its physical Google-branded payment card which had been tested as an alternative to NFC, but found to not be up to par by CEO Larry Page.

Wallet in Gmail gives the maligned service another way to grow – by tapping into a user base of some 425 million plus email users. However, Wallet for Gmail is only available to those over 18 and in the United States for now. Expansions to other parts of the world have yet to be announced.