While its roots lie in search, today, Google wears many hats. From self-driving cars and wearable technology to social networking and mobile operating systems, there are few industries where the search and advertising giant has yet to make its presence felt. Lately, however, Google’s expansion has taken a noticeable tack in a more singular direction: e-commerce.

With the outsized success Amazon and eBay have had building online marketplaces that seek to remove the barriers around buying and selling on the web, it was only a matter of time before Google decided to pull its chair up to the e-commerce table. Today, TechCrunch has learned via a tipster that Google has quietly been pursuing its marketplace ambitions under the auspices of a new platform that leverages its increasingly powerful cloud services to power live, real-time commerce.

The product, which has reportedly been named “Helpouts” and is currently being tested internally in Mountain View, will take shape as a marketplace that enables individuals and small and large businesses to buy and sell services via live video. With the capacity to connect merchants and consumers on both an immediate and scheduled basis, according to our tipster, the platform will allow sellers to create their own profiles and take advantage of reputation management, scheduling and payment features, while offering robust search and discovery tools for consumers. 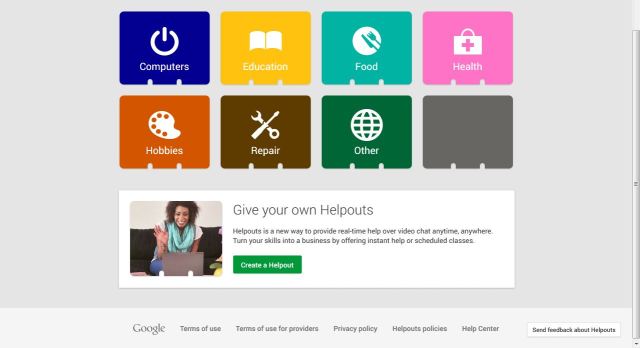 As its live video infrastructure is increasingly becoming the unifying backend for its expanding roster of real-time products, Google’s new marketplace will leverage Hangouts to deliver services via live video. To that end, the platform will also come integrated with what could end up being a handful of Google products, particularly its young virtual wallet and payment service, Google Wallet.

From what we’ve heard, Google began internal testing of the product in late June, but may be at least a month away from a public release.

In the meantime, from what we can gather from leaked mockups of Helpouts, the platform seems reminiscent of eBay’s recent efforts to expand its own marketplace with the launch of Secretguru, its concierge-style platform that allows merchants to offer a range of services directly to consumers — from business mentoring to beauty tips. 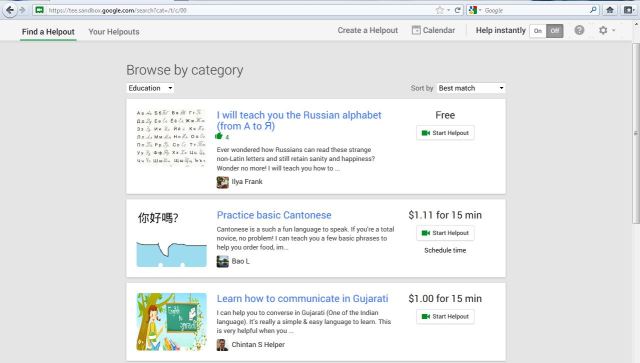 Part of the reason Amazon has sprinted out to such a commanding lead in the e-commerce market is its growing network of fulfillment centers and distribution warehouses, which allow it to produce that magic, online retail bullet of low prices, convenience and speedy delivery. Without a fulfillment network, Google’s own local shopping ambitions seem to be taking a different shape. With Helpouts, Google, like eBay appears to be leaning into the territory of collaborative consumption marketplaces like, say, Zaarly, TaskRabbit and Live Ninja.

According to our source, Helpouts, like these startups before it, will cover a range of categories, including computers, education, food, health, hobbies and repair. One can then imagine services on Helpouts ranging from health consultations and fitness classes to appliance repair support and cooking lessons. 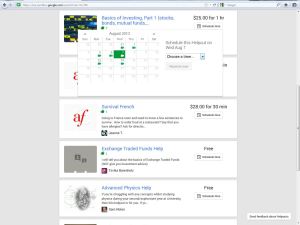 Google has also apparently partnered with a number of brands during internal testing, including One Medical Group, Sears, Weight Watchers and Alliance Frances, for example. At launch, the platform will also reportedly include an array of individual merchants and instructors as well, from yoga gurus to fitness teachers — all of whom will be able to offer both free and paid services to consumers via Helpouts.

According to our sources, with Helpouts, Google is looking to remove some of the barriers that have traditionally stood in the way of the seamless delivery of live services. For example, using Helpouts, a Spanish tutor from Argentina could offer language training to students in Japan, while a Yoga instructor in New York would be able to provide classes to a stay-at-home mom in Wyoming and an appliance repair shop could walk a customer through fixing a broken fan in their laptop — with an Internet connection being the only requirement.

Under the new, “One Google” Era, the company has begun to prioritize a greater collaboration or interrelationship between its products. With Helpouts, one could also imagine how the platform can act as a logical extension of Google’s core search and ads business. For example, customers could connect to retailers and manufacturers to get recommendations and advice on product purchases — or receive guidance on how to set up their products.

This could work to shore up a nagging gap for Google: When it comes to product searches, people no longer turn to Google. It’s all about Amazon. It also wouldn’t be a stretch to imagine Helpouts connecting to YouTube to offer video or lesson playback or integrating with Google’s nerd glasses. 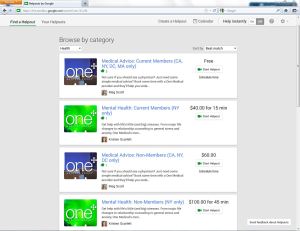 Of course, as with any Google product launch, life could be getting a little bit tougher for its smaller (and startup-y) competitors. There is a long list of businesses that either parallel or would directly compete with some part of Helpouts, whether it be LiveNinja, PowHow (which is, believe it or not, founded by a former Googler), Live Moka, InstaEdu, Shmoop and, perhaps less directly, platforms like Angie’s List, Udemy, Skillshare, TaskRabbit, CreativeLive and Curious. Though, admittedly, some of these overlap more than others.

When it comes to big data or resources that can be thrown into curating a service offering like this, startups are bringing a knife to a gun fight. Firstly, there’s plenty of room for a more polished, higher-quality product in this space and, secondly, Google has video tech that’s already been widely adopted by individuals and businesses. Not to mention, most startups can’t hold a candle to Google’s marketing machine.

Furthermore, according to our sources, Google has been building Helpouts in complete secrecy — well, until now — and few employees at the company were initially aware of the product, which has been developed by a team of two dozen engineers over the past year. Other than that, details are hazy. Perhaps Sergey and his secretive Google X unit are responsible. Only time will tell. 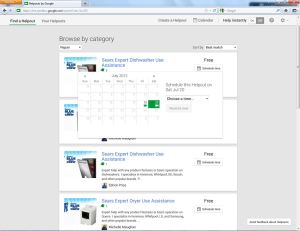 In the meantime, some may be wondering, if Helpouts is destined for YouTube (or at least HangOuts)-level adoption, or whether this is more of an experiment and it will just end up suffering the same fate as Reader or the geek-adored Wave. It’s not totally clear just how much marketing spend Google is going to dish out or whether it intends for this to have mass-appeal, but based on what we’re seeing, I would lean towards the affirmative.

Furthermore, while the type and date of the product’s rollout remain unclear, we’ve heard from sources that Helpouts was recently the subject of a company-wide meeting, which suggests that at least a few Googlers are taking this seriously. 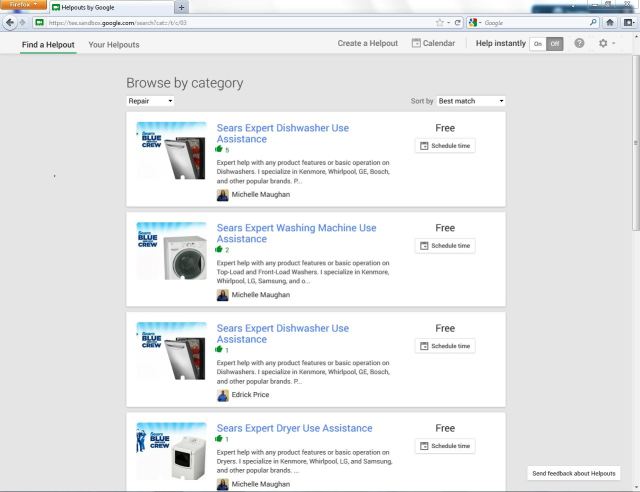 Additional key sleuthing and reporting contributed by the one and only Mr. Frederic Lardinois, the Maestro of Mountain View.