The auction giant eBay today is taking one more step in its transformation into a wider online marketplace. It has launched a new service in the UK called Secretguru— a concierge-style service where people can buy time from professionals in areas ranging from cooking to business mentoring and beauty. The move puts eBay into the territory of collaborative consumption services like TaskRabbit, Zaarly and Care.com, and it is a sign of how it’s looking to extend its operations further into brands beyond that of eBay itself.

For now, eBay is calling this a pilot still in beta, and it is running it only in the UK. “Since it is a very early pilot (beta), you might notice some things that need improving,” Secretguru says on its About page. “We are eager to hear about you and know what you liked and did not like. So please get in touch.” We have contacted eBay to ask what plans it has to roll it out further.

Just as eBay itself has become a well-known and well-used marketplace for people selling physical goods, Secretguru is extending that idea into hiring people. “Gurus” get their own pages on the site — for now all very uniform and templated — where they can describe what they do and why they are the best people for a particular job. Those interested in hiring them make contact through the site to ask further questions or negotiate a rate and assignment. Secretguru says it is on the lookout for more Gurus, too.

eBay does offer some services for hire on its main site, but most of this, in the UK at least, has been focused around the physical items sold through the site. For example, you can buy a piano, and you can also hire someone to deliver it. This site appears to be the first one dedicated to services alone.

Secretguru is not the first site within eBay that doesn’t use its own brand, but it seems to be the one of the first in a long time that has been created as such in-house. Others non-eBay brands like Gumtree, StubHub, Brands4friends, and PayPal were all picked up through acquisition. The classified site Kijiji is now called “eBay Classifieds.”

The focus for Secretguru, at least for now, appears to be on a curated list of professional people — as of today, only 17 — rather than creating a listing of thousands who can offer services for a job for the lowest rate possible. People are listed by expertise, not price, for starters; and given the sorts of services on offer, the implication is that price is perhaps not the first consideration for would-be customers.

“SecretGuru is a service that puts you in touch with experts (or Gurus) you can hire to create new, fun & memorable experiences. These people can be hard to find, so we set up SecretGuru so you can spend more time enjoying what they have to offer!” the site reads. “Our Gurus span a variety of industries, so you’ll find professional chefs you can hire to cook at your dinner party, artists who’ll paint a bespoke mural in your home, and even shoe designers who’ll teach you how to make your own shoes!”

There doesn’t appear to be a way of users reviewing people yet, but that may come as the service matures. 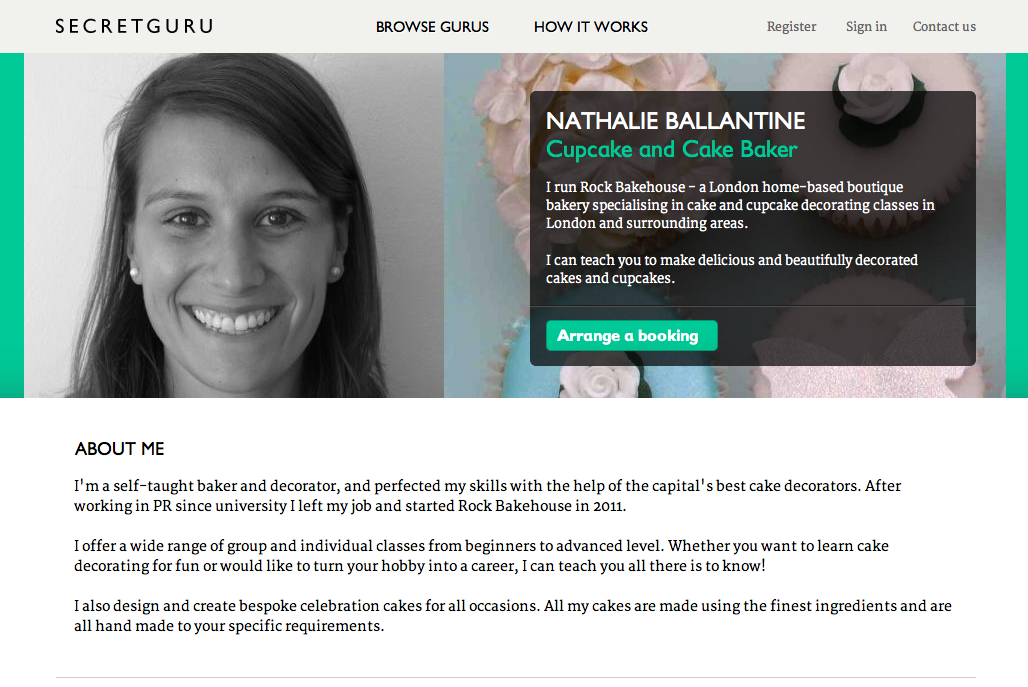 We’re reaching out to eBay for further details on Secretguru and will update this story as we learn more.

Update: And here’s eBay’s response: “Our innovation team at eBay is always exploring new products and services. It’s not unusual for eBay to run pilots of this kind.” Among other pilots trialled in the UK, PayPal has been running PayPal Instore, a mobile payments system where users can create their own barcodes to pay for items.