Pluralsight, the online training resource targeting professional developers that announced its raise of $27.5 million from Insight Venture Partners earlier this year, is now putting that funding to use. The company, whose corporate users include Microsoft, Salesforce, Twitter, Facebook, Dell, HP, Intel, Disney, EMC and others, is acquiring PeepCode, a similar resource providing video tutorials on a range of technologies, such as Ruby, Node.js, JavaScript, Unix, Git, CSS, RSpec, databases and more.

Terms of the all-cash deal are undisclosed, but the move will add around 100 new courses to PluralSight’s online library, and will  bring a significant amount of open source content to its service. [Update: originally, we said this was the first time, but Pluralsight has some OS content previously.] This is an important addition, given that many pro developers are interested in familiarizing themselves with open source technology and tools.

“PeepCode is one of the most respected names in open-source development, with clients such as GitHub, AT&T and Yammer,” says Pluralsight CEO Aaron Skonnard. “Up until now, Pluralsight’s customer base has mostly revolved around Microsoft-oriented enterprises. This acquisition gives Pluralsight the content – and the brains behind it – that has become the go-to learning resource for serious open-source programmers,” he adds. 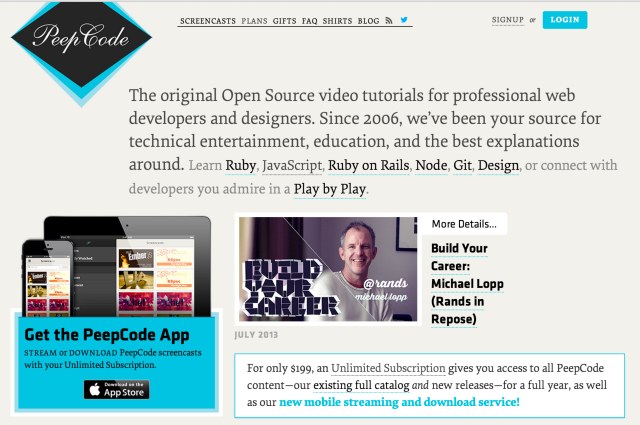 For those unfamiliar with Pluralsight, the company was founded back in 2004 and began its life as a classroom training outfit before shifting its business online three years later. Today, it hosts hundreds of courses with plans priced for individuals, mobile users, businesses and enterprise. The service has been historically strong in Microsoft technologies, but also offered some material for Salesforce developers, Java, Android and iOS.

Earlier this year, Skonnard said the company would use its funding to increase its catalog on social (Twitter, Facebook) technologies, Java, Android, Ruby, PHP, and Python, as well as cloud platforms like Amazon’s AWS, Google App Engine, Windows Azure and others.

PeepCode offers some of that needed content, plus thousands of users of its own who had paid for screencast bundles (five for $55, 10 for $99 or unlimited for $199), which they could then watch online, offline or on mobile, via an iOS app.

These customers will now be merged into Pluralsight’s user base, which is now 300,000 across 150 countries.

In addition, PeepCode had several dozen independent authors who made the video training courses for teaching fees and royalties, similar to Pluralsight. Dozens of these instructors will make the transition as well, joining Pluralsight’s 150 authors. Also joining is PeepCode founder Geoffrey Grosenbach, who will now become a VP and head up all future open-source development.

“We’ll be working on the integration of the PeepCode content into the Pluralsight library over the next few months,” says Skonnard. “Soon users of both sites will get access to the combined libraries of Pluralsight and PeepCode, which now totals more than 650 courses.”

However, because PeepCode’s subscription model is a bit different from the one Pluralsight offers, there will be an exchange system involved. For example, a five-tutorial package may convert into a certain length of time on Pluralsight.

Both sites will operate as is during the next few months, then eventually PeepCode.com will redirect to Pluralsight.com.

Following this addition, Skonnard says that Pluralsight is now on track to reach triple-digit revenue growth again this year.