From the team behind Checkthis, Frontback is a straightforward iPhone photo-taking app to capture the moment as it happens. You launch the app, take a photo of what you have in front of you, take a photo of your face and share the digital collage on Instagram, Twitter or Facebook. It’s addictive, very easy to understand, and, more importantly, deeply personal.

“People tell us that they want to see their friends, not only what their friends see,” co-founder and designer Frédéric Della Faille told me. “We want to own the selfie,” he continued.

The Frontback concept isn’t something new. When you make a post on Checkthis, you can add as many photos as you want, as well as text and headlines. Nearly four months ago, Della Faille first posted two pictures on Checkthis of New York’s beautiful landscape and his reaction. He explained the concept of a ‘#frontback’ at the same time.

Over the past few months, I have started noticing that more and more users were posting #frontback pictures on Checkthis. Like in the early days of Twitter, a user invented a new use case — except that this time around, the user was Checkthis’ co-founder. There wasn’t any sort of #frontback wizard tool to ease the process of creating them. Users were only experiencing with this newfound lingo and artistic rules.

Enter Frontback, the app. It was released today in the App Store. Now, there is no whitespace around a Frontback photo, absolutely no chrome. The photo itself doesn’t have any filter. It’s just two square-ish photos on top of each other, filling up the entire screen of your iPhone. It’s all about immersing yourself and putting yourself in your friends’ shoes.

“It tells so much more than a photo on Instagram,” Instagram designer Tim Van Damme recently told Della Faille. “Two photos change everything,” Della Faille told me. “On Instagram, you share something because it’s beautiful, but you don’t share the context,” he continued. 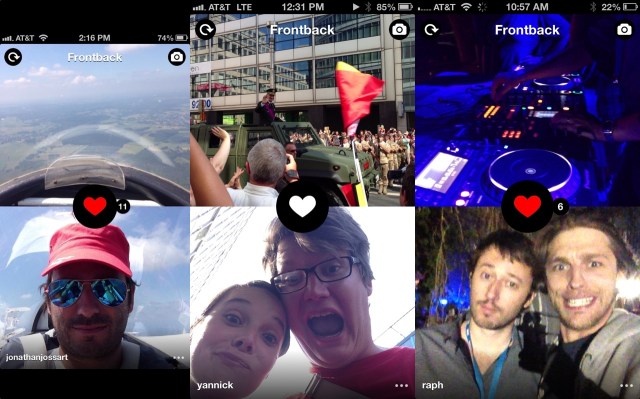