Forrester Research has now released its annual look at the state of IT spend globally, and the analysts project that there will be $2.06 trillion invested across software, hardware, and IT services by enterprises and governments in 2013. Within that, U.S. will be the biggest-spending country by a long shot, and — in a sign of the times — apps will be the single-biggest spending category of all.

Overall, Forrester’s is a more sombre assessment of IT spend compared to Gartner’s, which a couple of weeks ago released its own IT spending estimates (again, not including consumer spend) and put the figure at $3.7 trillion. And it is a more sombre assessment compared to its figures in January, when it noted growth of 5.4% growth for 2013 in local currency terms and 3.3% in U.S. dollars.

As with Gartner, Forrester also puts in the proviso that currency fluctuations are having an impact, specifically because of the strength of the U.S. dollar compared to other currencies. Measured in U.S. dollars, growth has been lowered to 2.3%; in local currencies it’s 4.6%. (Gartner’s figures were 2% in U.S. currency; 3.5% in constant currency.) “The continued recession in Europe and slowing growth in China will offset improvements in the US, Japan, and some emerging markets,” writes analyst Andrew Bartels.

We’re reading through the long report for more insights; for now, here’s a look at some of the bigger takeaways:

Software is eating the world. Forrester’s big-picture look at spending puts software as the biggest general category for investments, at $542 million for 2013. “Software is where most of the big changes in technology are taking place,” writes Bartels. That is to say, while legacy, on-premise investments are “languishing,” those that focus on cloud-based implementations such as SaaS; and “smart computing” in the form of big data analytics and mobile apps are booming — following trends we’ve seen for a while now. Overall, software investments are set to grow 3.3% this year and 6.2% in 2014 — growth rates that he concedes “may not seem impressive [but still] stronger than any other tech category.” A full breakdown of software spend is at the bottom of this post. 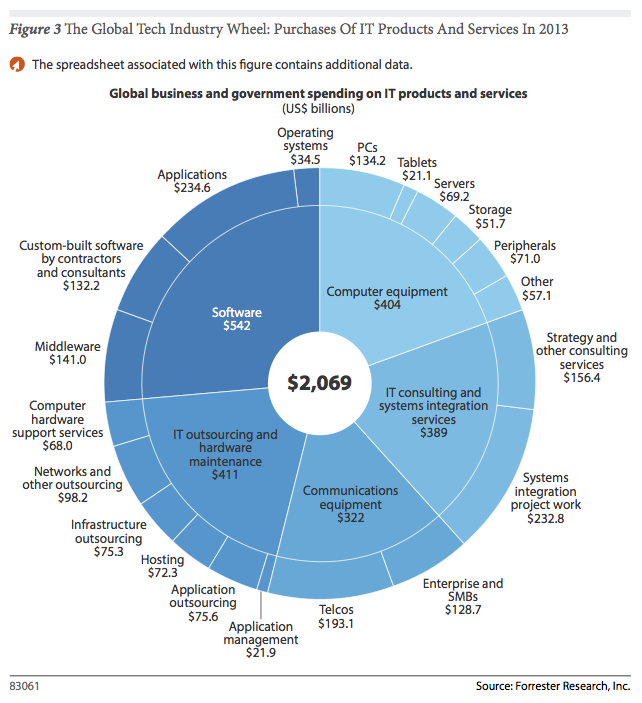 Tablets — and Apple — continue to lead the charge in hardware. If you look at the IT spending wheel above, it’s clear that PCs are the single-biggest category for computer equipment, at $134.2 million in 2013. But in fact PCs are a shrinking market. Traditional PCs, Bartels writes, will see “just a 3% rise, despite the launch of Windows 8 operating system.” So what’s growing? Tablets, and specifically the iPad. Forrester projects that sales of tablets to business and government will go up by 36% this year to $21 billion. Again, the big winner here continues to be Apple, taking $14 billion of that this year. Samsung Galaxy and the Surface from Microsoft are “helping to expand the tablet market, without putting much of a dent in the growth of the Apple iPad so far.”

Similarly, Apple, as well as Linux, continue to grow in the traditional PC category against Windows-powered machines, while the rest of the picture is relatively discouraging. There will be $135 billion spent on PCs in 2014, a rise of only $1 billion on 2013, with Windows-based devices down by $7 billion, and Apple Macs and tablets rising by $6 billion. “Elsewhere in the hardware market, spending on storage hardware will be flat, purchases of servers will decline by 1%, and sales of computer peripherals will fall by 3%,” Bartels writes. Indeed, earlier this year Forrester predicted that Apple would sell some $39 billion in hardware over the next two years.

The U.S. is eating the world. The strength of the dollar is one way that the U.S. is impacting global IT spend; the other is the fact that it is very much the biggest consumer of IT, accounting $819 billion in spend this year, according to Forrester’s estimates, rising to $875 million in 2014, inching up to be nearly the size of Western Europe and Asia combined in terms of IT spend.

Impressively for a market its size, of the big three regions, at 5.9% the U.S. also growing the most at the moment, nearly as much as the emerging (and still very small) market of Eastern Europe/Middle East/Africa (at 6.9%). By 2014, Latin America will emerge as the fastest-growing at a a rate of 10.7%. As to the others, Europe appears to be recovering somewhat after a huge, recession-led dip in 2012, spending $487 million in 2013; while Asia has this year taken up the baton as the region most hit by wider economic forces and will spend $492 million on IT across enterprise and government organizations.

Note: Forrester only lets press use one illustration per post, so I’ve had to update the post by cutting out the other graphics and inserting the data into the text instead.