Feedspot, the online RSS reader that jumped into action last summer following the removal of social features from Google Reader, is again stepping up to the plate in the wake of the Google Reader demise. The startup, now with another year of development work under its belt, not only offers a solid Google Reader replacement for the desktop, it’s also one of the few to include the ability to search within your RSS feeds.

When Feedspot first debuted in private alpha, the goal was not to be a Google Reader clone, but rather to focus on offering a topic-based stream of news and feeds from users’ Twitter accounts in addition to the standard RSS subscription model. However, those choices were made at a time when going up against a giant like Google meant you had to have a differentiated feature set in order to lure users away from their old standby.

Today, things have changed. With Google Reader out of the picture, startups like Feedspot have a chance to grow a viable user base of their own, and they can do so without having to be remarkably different from what Google Reader once was. Simply offering a reader that looks and feels a lot like Google’s old one is good enough for many.

In this respect, Feedspot, now in public beta, succeeds. It offers an unadorned interface that’s reminiscent of Reader’s starker look, its same keyboard navigation and other shortcuts, and a compact “list” view, which makes for easier headline scanning. 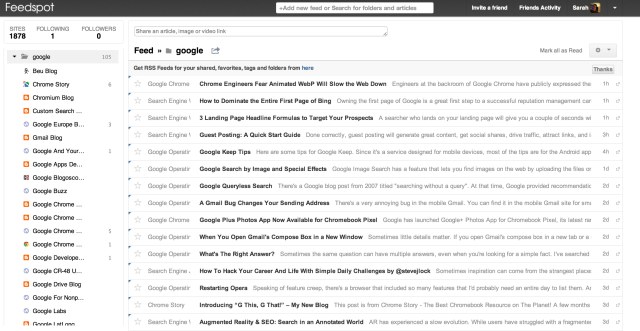 Also, unlike many of the services launching out of Google Reader’s ashes, Feedspot is one of the better options thanks to its head start in terms of development time.

While Digg Reader is still struggling with things like handling unread counts, for example, Feedspot has that and more. For example, the service lets you automatically post both your shared items and favorited items to a variety of third-party sources, including Facebook, Twitter, Pocket, Instapaper, Readability, Buffer and Evernote, plus it lets you search through your folders and articles for keywords – something which even Feedly, one of the top forerunners among Google Reader replacements, has not yet introduced.

In Feedspot, in-article search is a paid upgrade option, which seems to be the direction other feed readers are also now heading (both Digg and Feedly have hinted that may be the case for them as well.) Feedspot Gold, which starts at $1.99 per month, offers the search and advanced sharing options described above, and it turns off advertisements and forces feeds to refresh more frequently, among other things. 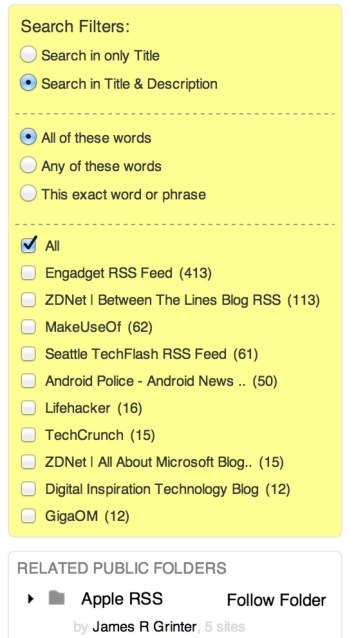 To get started with Feedspot, users import their Google Reader subscriptions via OMPL – you can still grab your subscription data, including feeds, stars and notes from Google Takeout up until July 15. You can also browse through categories to find sites you like, too.

The “follow your friends” feature in Feedspot is still there as well, allowing you to find and follow your friends after importing contacts from your email (Gmail, Yahoo, Outlook, Hotmail/MSN/Live, or Aol.) Users can also search for and follow public folders created by other users and follow those folders (e.g. technology, food, web design) instead of having to curate their own feed collections.

However, the social features may not be as compelling as they were back in Reader’s heyday since the RSS user base, already niche, is now fragmented across dozens of new and older services that have since picked up where Google Reader left off.

Feedspot founder Anuj Agarwal tells us that his service offers its own API . (Correction: this is the eventual goal). The bootstrapped startup today has 150,000 users and is now considering outside funding.