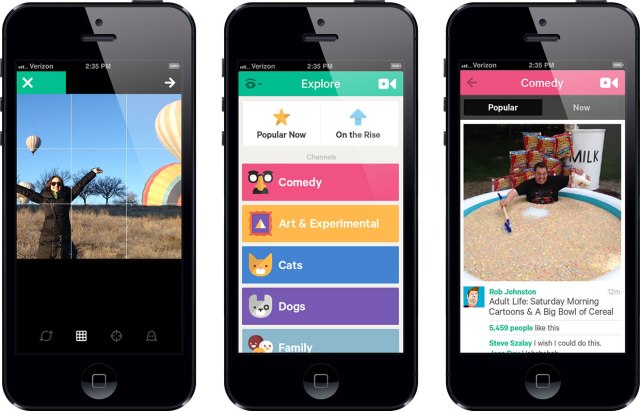 Vine, Twitter’s six-second looping video-sharing app, has just launched some new features to the app, including a redesigned camera, categories for various vine genres, and the ability to revine people’s existing Vines.

The update brings some much-asked-for features to the social network, and also improves users’ abilities to gain and following and get noticed within the app.

To start, you’ll notice that the camera has been redesigned to make it even easier for hard-core creators to frame their shots, which is especially important with stop-animation (something that’s become a bit of a hobby for many Viners). The redesign brings a grid, the ability to focus, and “ghost tools”. Ghost tools let you view your previous shot, but unlike Instagram video, there is no editing within Vine.

The update also brings with it some new ways to explore and be noticed on Vine. For one, Vine now includes 15 channels, letting you submit posts to the Explore screen with a better chance of being noticed. These categories include music, nature, comedy, and more. Each one has it’s own theme and popular feed, which allows for a number of different ways for you to be discovered on Vine.

I recently spoke to Meagan Cignoli, a professional Viner who makes her living making stop-animation videos for various brands on the platform, who explained that she was truly hoping for Vine categories so that others can be discovered as she was. She now has over 200,000 followers, as opposed to a measly 10,000 on Instagram, which she claims has to do with Instagram’s lack of options to rise to popularity.

But if channels aren’t enough, Vine has also included a new “On the Rise” category, which lets you check out people who are gaining popularity on Vine.

The ever-growing community of Viners has also been clamoring to have the ability to “Re-vine,” which seems like a logical request given that Vine’s parent company is the original creator of the Retweet. Now, users will be glad to know they can share a Vine in their feed to their own set of followers with the simple tap of a button.

Finally, Vine has added the ability to control who you share with. When the app originally launched, users had no privacy whatsoever. Once a Vine was shared within the community, it was public. Now, users can decide to only let followers see their posts by going into Profile > Settings > Your Content.

With Instagram’s recent launch of Instagram video, many have posited that the end of Vine is near. However, Vine has shown rapid growth and an active community over the past six months, with over 13 million users on the service. The limits put forth within the app, like a six-second maximum, and a lack of editability, have actually made the app more appealing to users both creatively and consumption-wise.

Obviously, time will tell if Instagram Video is hurting Twitter’s new video-sharing beast, but it seems like there’s plenty of room for both in the market. Especially when Vine continues to iterate quickly.

Remember, the app launched as a relatively barebones video-sharing service before responding to user requests for front-facing camera functionality and user mentions. And shortly thereafter, Vine made its way to Android.

This is just the latest in a succession of solid updates from Twitter and Vine. Interested users should update the app here.