Google X, the secretive lab behind projects like Google Glass and Google’s self-driving cars, announced its latest project today: balloon-powered Internet access for those areas of the earth where regular terrestrial Internet isn’t a good option. Earlier this week, Google started testing these balloons, which are meant to provide Internet access comparable to 3G networks while sailing the stratospheric winds, in New Zealand.

We had previously heard rumors about this, but just like most of Google X’s projects, this idea sounded like a long shot. Using free-flying balloons, after all, sounds like a recipe for disaster – or at least for run-away balloons.

Because the whole idea sounds a bit crazy, Google says, it’s calling this initiative “Project Loon.” Google, however, believes that it has found a way to let these balloons “sail freely on the winds” and steer them by moving them up or down to catch the right winds. This still means the team has to manage a fleet of these balloons – and the idea here is to one day have these fly these around the world. Google says it’s solving this problem “with some complex algorithms and lots of computing power.” Google uses wind data from the National Oceanic and Atmospheric Administration to predict the balloons’ flight paths. 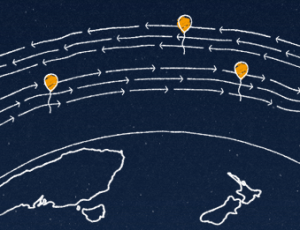 Currently, Google says it is using 30 balloons in this pilot project and about 50 testers in New Zealand are using the service on the ground. These testers have special antennas that can connect to the balloons when they are within a 20km radius.

Google, and its chairman Eric Schmidt in particular, have long been talking about the importance of getting those two-thirds of the earth’s population who don’t currently have Internet access online. Project Loon is meant to help solve this problem, Google notes. Not only could it bring Internet access to areas where today’s technologies don’t work well (jungles, archipelagos, mountains), but it seems Google also hopes that this balloon-powered network can help bring down the price of Internet access in many countries where it’s currently unaffordable for many people.