In April, Google announced a couple of new features that were meant to speed up mobile browsing. Among them was “Quick view,” an experimental feature that added a badge to Wikipedia results on Google’s mobile search results pages that, when you clicked it, loaded the Wikipedia result in around 100 milliseconds. Now, however, it looks like these Quick view badges were indeed just experimental and have quietly disappeared from Google’s mobile search results pages. 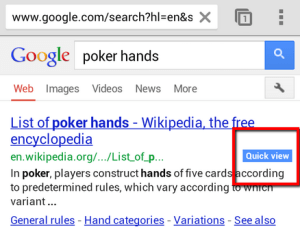 We asked Google about this change, but the company did not provide us with an on-the-record statement. It’s common for Google to quietly run various experiments on its search results pages and then remove them later. Once the company officially announces a feature, however, it tends to keep it around for a while.

When Google launched Quick view, it said that it was working on bringing more sites on board and even offered a sign-up page for webmasters who were interested in making their sites available through this feature. The sign-up page is still available.

It’s surprising to see Google, which loves anything that can help speed up the web, remove this feature from mobile search. Maybe users didn’t actually use Quick view or didn’t fully understand it, but its odd to see it go. It was actually a very useful feature and worked exactly as advertised.

It’s worth noting, by the way, that this version of Quick view was different from the one Google also once featured for quickly opening up PDF files, Word documents, spreadsheets and presentations. Maybe anything called “quick view” doesn’t have a long life expectancy at Google.