Foursquare this morning has launched a pretty new visualization feature called Foursquare Time Machine, which offers a new way to view a history of your check-ins on an interactive map. And oh, it’s also an advertisement for Samsung’s Galaxy S4 smartphone. Hey, look, Foursquare is trying to make some money by using your data! How clever!

The company has long since allowed users to delve into their check-in history through a searchable timeline it offers on the Foursquare.com website. And while the new Time Machine offers a briefly fun diversion for bored office workers looking for a little escapism, there’s not much value to it as a real product feature that you would return to again and again, following your first, more curious exploration. 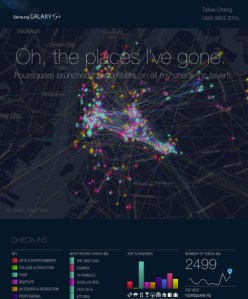 As the Foursquare blog post explains, Time Machine lets users view their history and “zoom through time and space” to visualize your check-ins and “discover all the places you should head to next.” On that latter point, it appears to be referring to the images at the bottom of the Time Machine page which suggest other venues near your top check-in spots, which you can click on and save for later if you choose.

But all this is really just a front to allow Foursquare to show you (and generate some revenue from) a large Samsung Galaxy S4 ad. The site is branded on the left side and on the top right (upon first launch), and, after clicking “fetch my history,” the middle of the Time Machine’s top navigation teases “The Next Big Thing.” As that experience loads, Samsung Galaxy S4’s branding shows yet again. There is literally nowhere on this micro-site where you can’t see the word “Samsung.” To be clear, this is not a Foursquare product or feature, this is only an ad.

The company has been busy in recent weeks beefing up its online experience at Foursquare.com in an effort to get more users to consider visiting its site on the web where it could monetize better through ads. This is tough, since Foursquare is still generally known as a mobile check-in app, and not the Yelp alternative it now wants to become. In addition, Foursquare has been opening up its platform to more businesses and advertisers, striking deals with the major credit card companies for member discounts, bumping up its sales force, and more, all in an effort to finally make some money. And it has bought itself a little more time to figure things out, too, thanks to its recent $41 million round, closed this spring.

It’s a timely move for Samsung as well, as the branded Time Machine experience comes on the heels of a recent Reuters report stating that Galaxy S4 sales were going to disappoint. Brokerages downgraded Samsung, citing weakening profit growth for the company. Though the S4 became the fastest-selling smartphone since its launch in late April, that momentum has now slowed, leading Samsung to a need for bigger and more creative ads.