A month after Tumblr introduced sponsored posts into its native mobile applications, the company is today bringing those same brand advertisements to its web dashboard. Launch partners for these new “Sponsored Web Posts,” as they’re called, include Viacom, Ford Motor Company, Universal Pictures, Capital One, AT&T, Denny’s and Purina.

Tumblr users will be able to reblog, like, follow and share these ads and the brands themselves directly from their web dashboard, which of course, is what we know all the Tumblr-lovin’ teens are just dying to do. Like Tumblr’s sidebar “Radar” ads, the new sponsored posts will be marked with an animated dollar sign icon to indicate that they are paid placements.

Also like Tumblr’s mobile advertising, users will only see up to four sponsored posts per day. The company notes in a brief announcement on the new ads that sponsored posts have already seen over 10 million likes and reblogs since their debut.

Sponsored Web Posts in the dashboard will continue to roll during a beta period that ends in June 2013. During the first week, premiere spots belong to Viacom, Ford Motor Company and Universal Pictures, and then they’ll become available to Capital One, AT&T, Denny’s and Purina.

“The engagement rates on the Tumblr Radar and Sponsored Mobile Posts have been spectacular and we have taken this same carefully architected approach to this new web in-dash opportunity,” said Lee Brown, Global Head of Sales at Tumblr, in a release. “The Tumblr post is a flexible, dynamic and expressive medium, and we are delighted to give marketers yet another opportunity to promote their content and connnect with this vibrant and engaged community.”

As Tumblr founder David Karp has previously explained time and again, Tumblr wants to offer advertisers canvas and space for “creative brand advertising” – something he feels hasn’t really had anywhere to live on the web. “We want to give them the space to do anything, a four-second loop, an hour and a half video, a high-res panorama, whatever they need to help them build amazing, interactive ads,” he said onstage during the TechCrunch Disrupt NY event in early May, ahead of the $1.1 billion Yahoo acquisition.

The expansion of brand advertising in Tumblr was expected, whether or not Yahoo bought the company. (Yahoo’s bigger plans involve search ads and ads that bloggers run themselves, for instance, and it doesn’t expect to see significant revenue from ads until next year.) But Tumblr’s younger user base is sensitive to change, and likely they’ll see these ads a disturbance, then blame Yahoo.

Already the user base was distressed over the impending acquisition, some leaving in droves for WordPress after the fact, and today a minor change to the Tumblr dashboard involving the relocation of the Reblog and Notes buttons has them hand-wringing again. Those changes rolled out yesterday, and today have reached 100 percent of Tumblr’s user base. The company says the buttons were moved for consistency between mobile and web.

These buttons used to be at the top of posts on the web dashboard, and now they’re on the bottom – I know, right? The horror! And if you think that’s bad, just wait until the kids see these new ads.

Tumblr’s teenaged audience has led to explosive growth for the company, but those users are also known to be fickle (and dramatic), which makes every change that Yahoo/Tumblr enacts going forward risky. It still remains to be seen whether or not the audience will stick around as the site becomes less of an online hideout, and more ad-driven in the future. 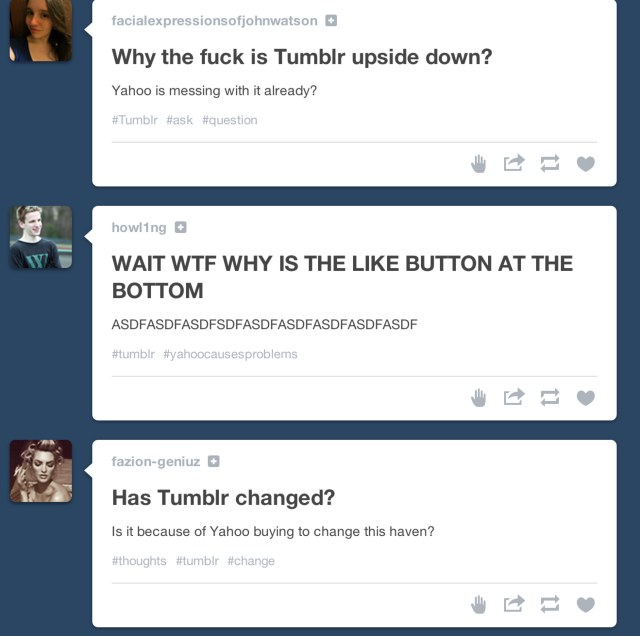 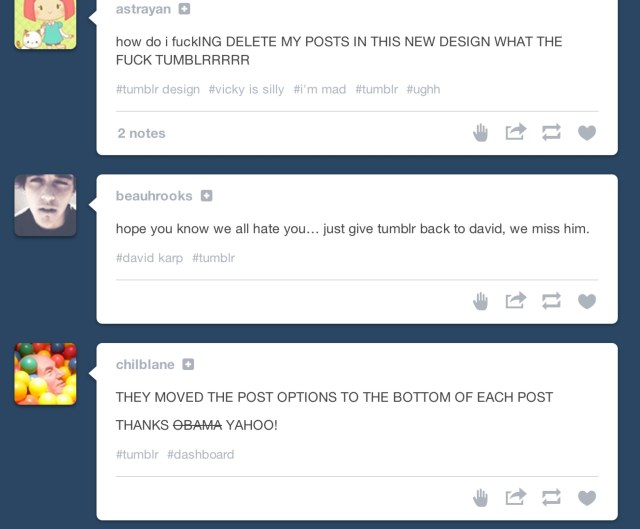 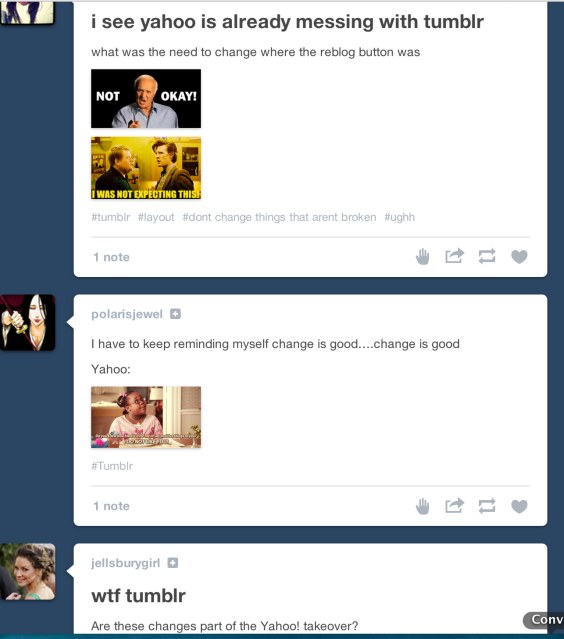 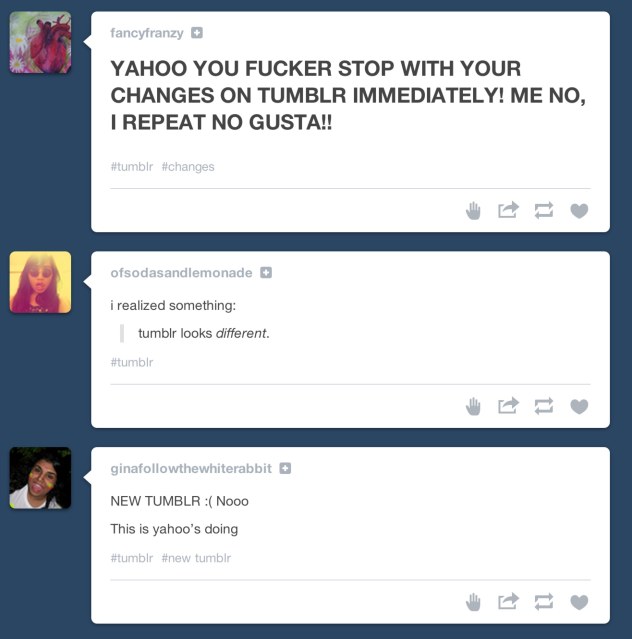