In November 2012, Google Play only accounted for 19 percent of the revenue generated by the two major app stores combined (Apple’s App Store and itself), but this April, that share has jumped by 8 percentage points to 27 percent.

One notable example of a developer capitalizing on this trend is Mobage, which generated either more or roughly equal the amount of revenue last month in both stores, and not just in the lucrative Asian markets, but in the U.S., as well. Combined, its applications generated over $5.1 million in Google Play in April 2013 (48 percent of all revenue), while the Apple App Store total was slightly higher at $5.6 million (52 percent). 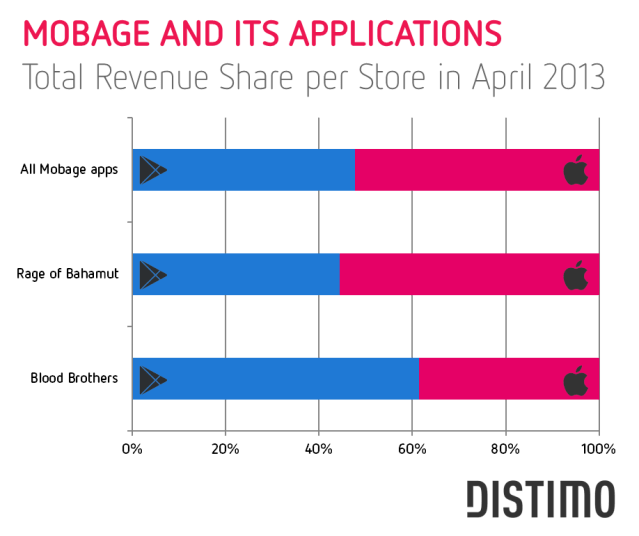 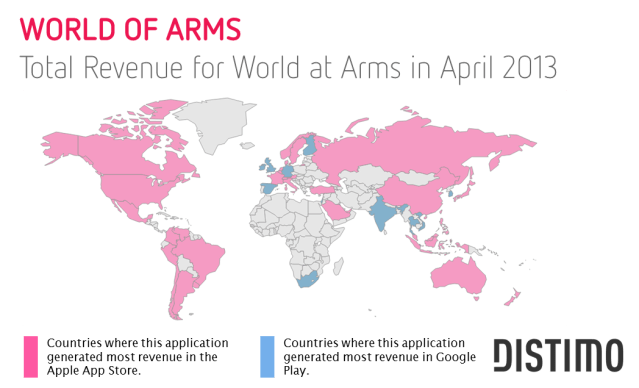 Meanwhile, for Square Enix’s “Final Fantasy III,” 73 percent of its total global revenue for April, but that figure seems less impressive considering its grand total was just $130,000. However, unlike “World of Arms” above, “Final Fantasy III” is a paid game at $15.99, which is likely why its take was relatively low. 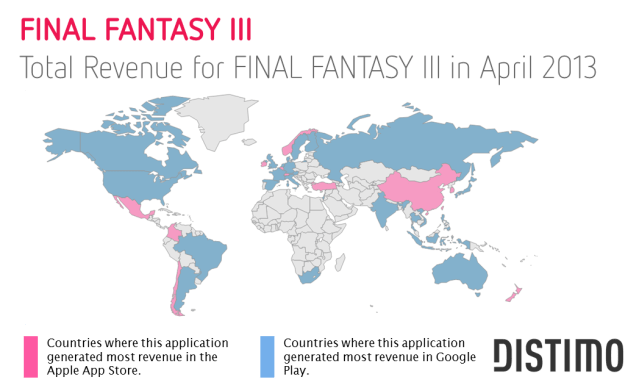 A more interesting case study of how a popular developer is attacking both app stores successfully comes from WhatsApp, which uses different business models to monetize its mobile messenger. On Android, users get a one-year free subscription, but then have to pay for the app afterwards, while on Apple’s App Store, the app costs $0.99. Download volumes on iOS are high, but then the app often goes on sale in order to kick those volumes into high gear.

The long game – hoping to monetize Android users after getting them fully addicted – is starting to pay off in a handful of countries for WhatsApp, including Germany, Italy and Spain. In Germany, Google Play earned the company nearly $290K versus $207K in Apple’s store in April. Compare that to the U.S. version with $355K in Apple’s App Store versus just over $41K in Google Play. 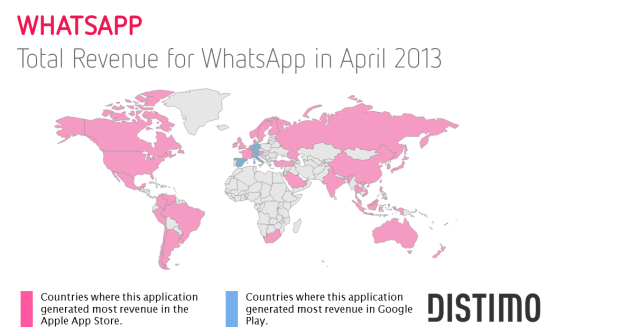 And in Spain, WhatsApp’s total Google Play revenue last month was 89 percent. Distimo, in fact, remarked that high Google Play revenues in that country were a common sighting nowadays, though the numbers themselves weren’t as high as countries like Japan or Korea.

Though the report had attempted to highlight case studies to show where Google Play was gaining ground, it eventually concluded that the Apple App Store is “still the most beneficial,” and especially in the U.S. Here, daily revenue in April 2013 generated by all applications in the top 200 grossing in Google Play was $1.1 million, while the daily revenue of the top 200 in the Apple App Store (both iPhone and iPad) was 4.6 times higher at $5.1 million, Distimo found. Most applications in those two top lists contained free applications using in-app purchases.

One of the explanations for this discrepancy, the report explains, is that many U.S. app developers are still publishing on iOS only. (This is a trend we’ve looked into here recently, as well.) However, even when apps were offered in both U.S. app stores, Apple iOS apps generated more revenue. For example, both King.com’s “Candy Crush Saga” and EA’s “The Simpsons: Tapped Out,” are high-profile case studies of this, with the latter generated around $4.8 million in April 2013 in the U.S., 79 percent of which was in the Apple App Store. 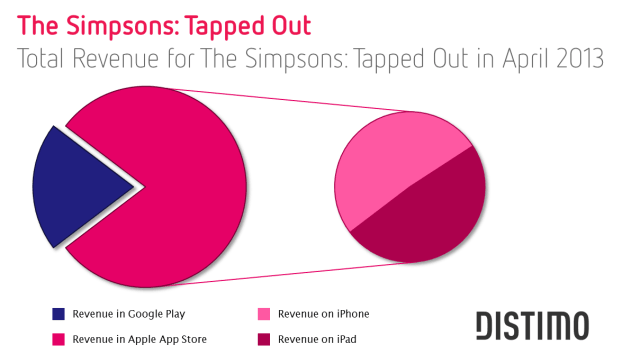