Microsoft PowerPoint facilitates presentation design with zero constraints. And startups like Prezi provide well-designed templates and other features to help you communicate what matters. Now an Israeli startup called Emaze is trying a different take by offering a much simpler presentation template system that promotes concision.

With $800K raised from TheTime.co.il, the company is actually trying to pioneer a new way of communicating. It’s not trying to migrate PowerPoint and Prezi users to its product. Instead, it wants users who don’t do email for a living, and for whom creating a simple 10-slide deck with PowerPoint or even Prezi is a confusing and frustrating experience.

Built entirely on HTML5 for PC and post-PC device compatibility, Emaze has the potential to become the “PowerPoint of the Everyman.” It’s quite easy to get going with but the young company has more work ahead of it to truly make the product’s usability dead simple.

I do, however, like the approach Emaze takes, unlike Prezi, of limiting users for their own benefit in order to get them quickly from first slide to “wow.” 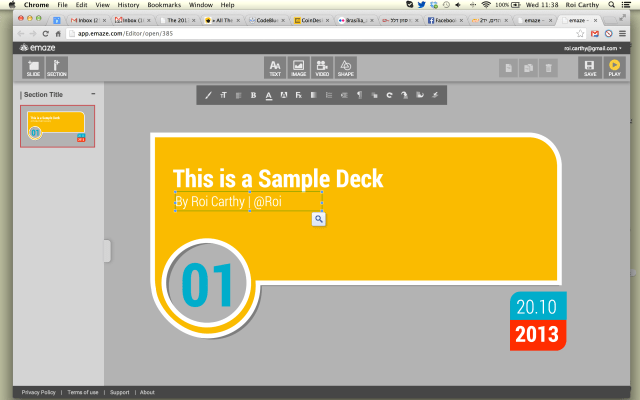 For example, users can’t choose any color they wish for text, or any transition between slides. This is because these are limited by Emaze to best fit the chosen template. Templates, by the way, are a key feature the founders tout as aimed at delivering a high-quality visual impact. There are currently six templates, including 2D and 3D ones. If you’re set on making me puke, there’s the “Desktop” template, which delivers Prezi’s trademark vertigo effect.

A couple of Emaze presentation examples are here and here.

On the product roadmap are automatic-recommended templates, import from PowerPoint, and dynamic infographics. The current six templates are a nice start, but the product would also benefit greatly from a wider selection of templates.

Emaze’s vision reminds me of the early days of another Israeli company, Wix, which set out to create a website authoring tool that was “As easy as PowerPoint, and as powerful as Flash.” In its last funding round Wix was valued at $250 million, and there are whispers of an IPO around the bend. If Emaze has its way, they’d like to follow these footsteps and become the Wix of presentations.