Verious, the mobile component marketplace which launched out of TechCrunch Disrupt SF 2011, is today debuting a new service which it calls a “code recommendation engine” for developers. The service aggregates the code and content from 10,000-plus sources, including around 3 million dev and design resources. This means that the engine scours a much larger database than the 2,000 mobile app components Verious.com previously offered.

“Last fall, as we were refining our product roadmap, we spoke to a number of developers who told us that they were constantly searching for content to help accelerate their programming efforts – beyond pre-built components,” explains Verious founder and CEO Anil Pereira. He says that sometimes the content they were looking for was more for planning purposes, while other times it was to serve a more immediate need.

“These activities spanned mobile, web and all other platforms, and what we found in every case is that developers started by searching and then ended up with fourteen browser windows open with content from various sites to determine what was the best path forward to solve their immediate coding challenge,” Pereira says.

Pre-built mobile app components, like those that Verious today offers, were only one part of the equation, so developers would turn to Google search instead. Pereira says the company realized they could help fill this need, by bringing all programming content into one search service.

In fact, Google once served this very same vertical with its Code Search Engine, but announced back in 2011 that it would shut that service down. However, code.google.com still lives today, though others have reported encountering 404’s at times. Whatever Google’s intentions, it doesn’t sound like it will actively develop Code Search going forward. This has led developers to turn to several alternatives, many of which are listed here, and some which offer larger databases than what Verious does today. However, many of those services are focused on narrower verticals – like open source code, for example.

To build its new engine, Verious used APIs from sources like YouTube, Scribd, GitHub, Slideshare, Stack Overflow, and others, while also going after the long-tail of development and design-related content from blogs, online tutorials, and other niche programming sites. 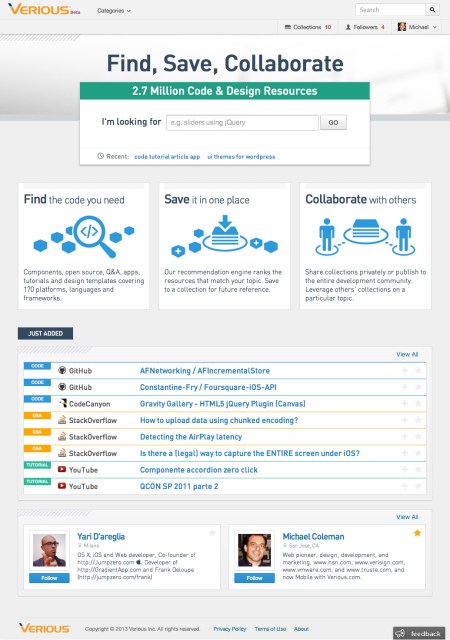 The challenge in building such a resource wasn’t only the size of this database (as detailed above), but the other efforts that had to be made in order to scrub and normalize the search results, index listings, assign tags to content, and make the system capable of fetching new content from feed sources daily, while also being able to add new sources on a regular basis.

Because of the value the team saw in this type of research tool, Verious also made a key decision about the company, too: it decided to move beyond being a “mobile only” service, and instead attempt to include every possible programming language, platform and framework. Pereira says Verious now has over 170 of these.

The new product launched into private beta this December, allowing users to save items found in search results to their collection on Verious. These online collections can either be kept private, or shared with others on a developer’s team. Other content, such as personal links and bookmarks, can be saved to these collections, too. 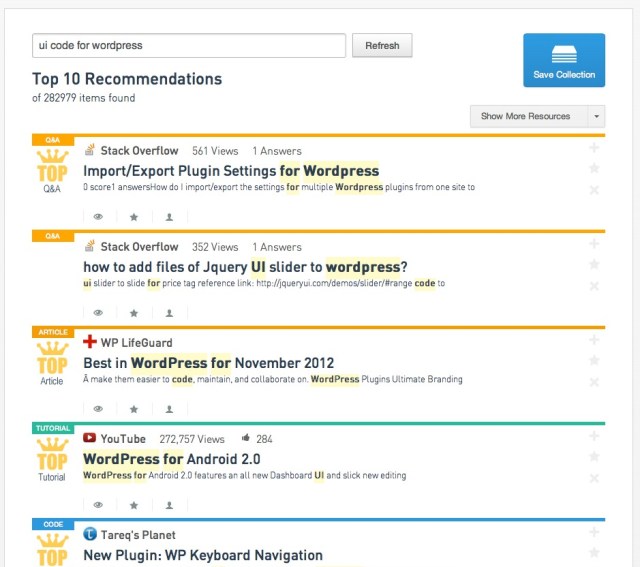 The final piece was building the recommendation engine. This proprietary technology looks at several factors, including popularity, usage, downloads, views, followers, favorites, and/or ratings, etc., as well as how “finished” a code snippet may be.

“The closer a piece of content is to helping a developer find code they can use, the higher a weighting it is given,” Pereira explains. “Since every item has attributes that have it fall on a particular scale, we then translate each scale into a common scale and that is how we output ‘top 10’ recommendations for each query.”

Something of a by-product of all this work is another feature that works like an “About.me” page for developers. Because Verious had been pulling in blog and website feeds for the search engine, they were able to create developer profiles along the way, linking to all of a developer’s content and code-related activities on places like GitHub, YouTube, StackOverflow and more. Of the 200,000 active developers Verious has spotted, it has managed to manually create over 1,000 of these profiles to date, and is now automating the process for the rest.

The updated version of Verious.com, which has now been revamped to showcase its new focus, is live now for everyone. 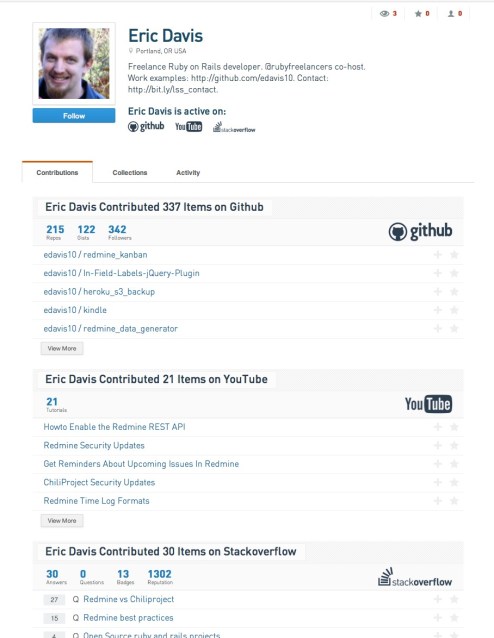