Backlift, a Y Combinator-backed startup that’s launching today, describes itself as a back-end service for front-end developers. The service takes all of the work of setting up a server environment out of the equation and just lets front-end developers focus on their work. All a user needs is a Dropbox account – Backlift uses Dropbox as a file syncing service – and a text editor. With Backlift, a developer doesn’t need to know how to set up Rails, Django or node.js to get started.

As Backlift founder Cole Krumbholz told me last week, the idea behind the service is to allow developers to jump right into working on their front-end code. For many people, he said, front-end tools can be a bit daunting and he wants Backlift to be a great learning tool, but he also aims to make it a platform for prototyping and, soon, a platform for hosting applications.

To get started, users simply sign in with their Dropbox account, create a new app based on a number of templates, including numerous backbone.js sample apps, a Google Maps API-based site, and basic Bootstrap-based sites. You can also use other popular technologies like AngularJS, CoffeeScript and Handlebars. Backlift then creates a new folder in your Dropbox account (and hence on your desktop, too) and you can start editing it with your favorite text editor. Every time you save an edit, Dropbox will sync with Backlift and you can immediately see the changes on your site (syncing starts less than a second after your changes are uploaded to Dropbox). 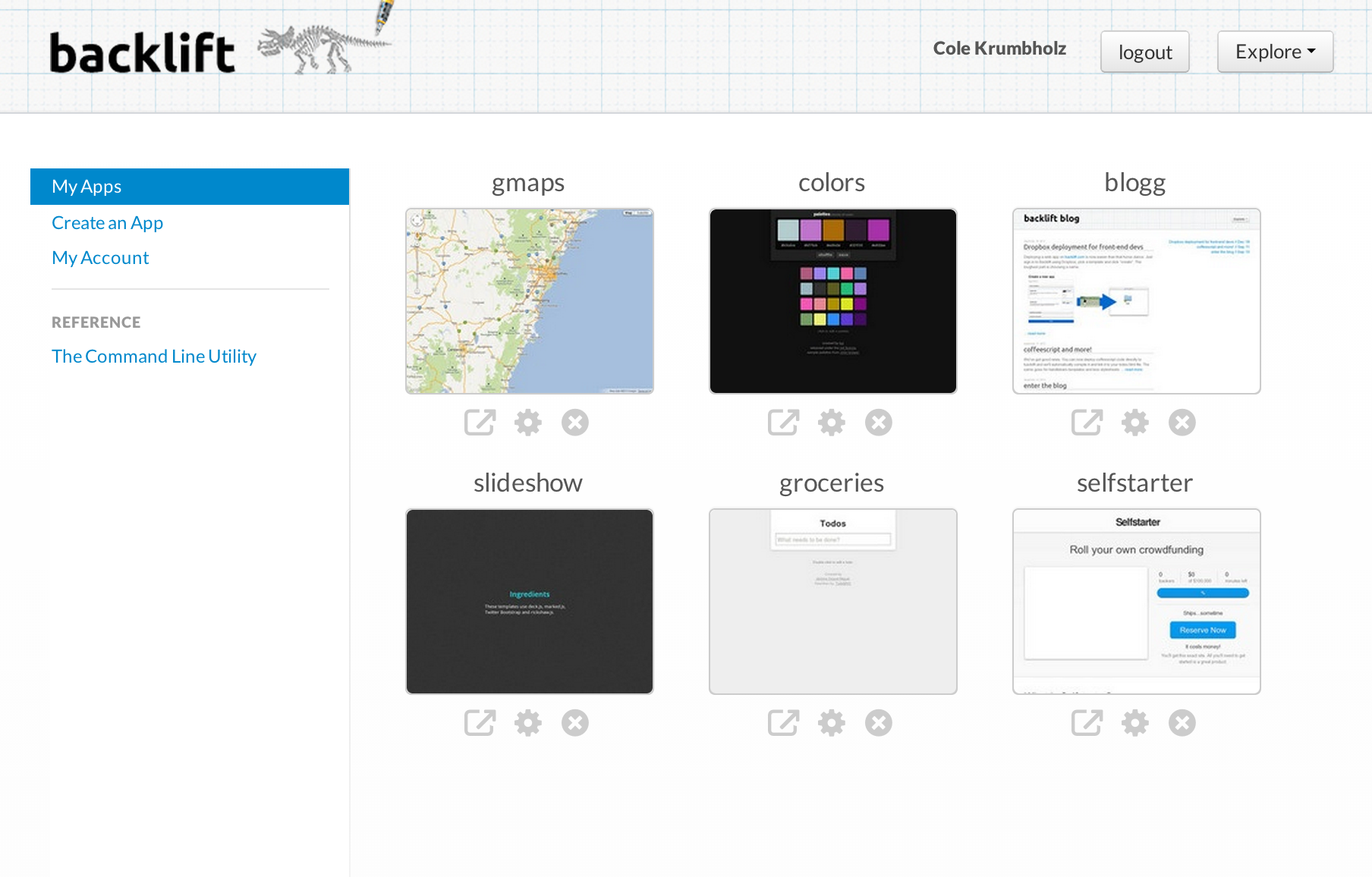 Given that most applications need to work with at least some data, Backlift also offers a basic API for working with data, as well as an admin dashboard for adding users and browsing, importing and exporting the data in your database.

One of the companies that has been using Backlift extensively during the beta phase is Automatic.com – the YC-backed company that recently launched its hardware for turning any car into a connected car. “We have our own Amazon S3 servers, however Backlift is a much easier, faster, and secure way of working on the site as we got it ready for launch and showed investors,” Automatic.com’s visual and interactive designer Gabriel Valdivia told me.

The service, Krumbholz told me, will evolve constantly and the team plans to launch quite a few new features in the near future – though he wasn’t quite ready to share the team’s plans just yet.

For now, Backlift is completely free to use. The team will likely add some premium features, though the details are still up in the air.

Krumbholz, by the way, is one of the few solo founders who have made it into Y Combinator. After he left the Navy, he previously worked on air traffic control interfaces and then started making mobile games for iOS.