Since Google launched its Google+ sign-ins earlier this year, social logins have suddenly become a hot topic again. According to the latest data from social login provider Janrain, Facebook continues to be the most popular identity provider for social logins, but the social network is starting to lose some ground to Google.

Services like Janrain, Gigya and their competitors make it much easier for users to register and sign in at a website (and for websites to get more information about their users). Most sites that use social logins offer a variety of options, with Facebook, Google, Yahoo, LinkedIn and Twitter being some of the most popular, but depending on a site’s niche, even offering social logins through networks like SoundCloud or Tumblr can also drive up registrations. Janrain Engage supports over 25 networks. 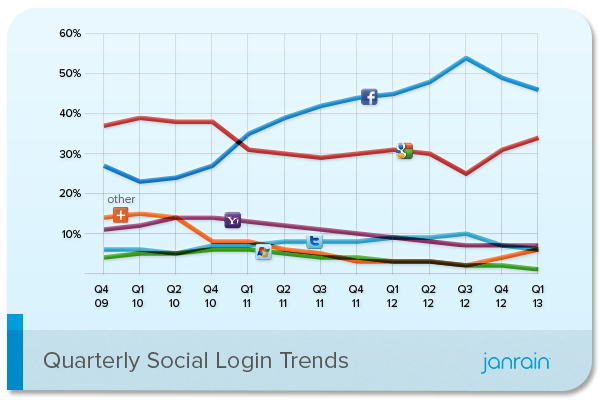 Facebook currently accounts for about 46% of social logins on Janrain and Google’s share is 34%. For Facebook, that’s a 3% drop from Q4 2012, however, while Google’s share increased by exactly those same 3%. This is the second consecutive quarter during which Facebook lost ground to Google. Janrain argues that this is a sign of the “trust and affinity felt toward Google’s service.” It’ll be interesting to see if Google’s push to make its Google+ logins the standard for sites that use Google logins will allow it to increase usage in the coming quarters. Janrain just added Google+ logins to its feature set, so it’ll likely make an appearance in its next report.

As Janrain’s report also notes, there are large geographic differences between which service users prefer for their social logins. In the Netherlands, for example, the social networking site Hyves accounts for a large share of logins through Janrain, while Google’s Orkut remains popular in Brazil and India. 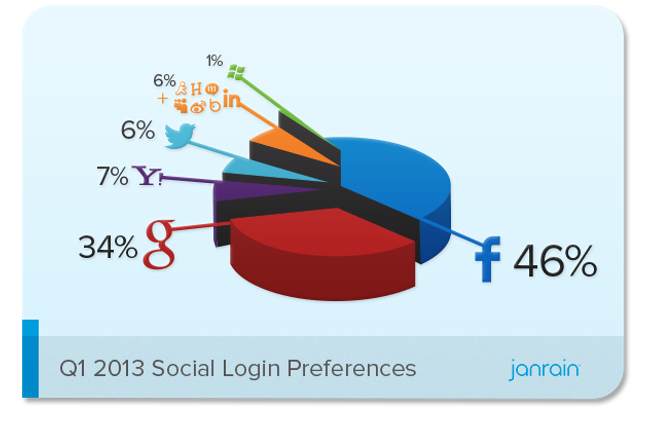