Sherpa, a stealthy startup that has built a personalized predictive intelligence app for the iPhone that’s powered by your location data and other personal information, is announcing today that it has raised $1.1 million in seed funding from Andreessen Horowitz (A16Z), Google Ventures, InterWest Partners, Merus Capital, Innovation Endeavors and AngelPad.

While Sherpa is not yet ready for a full public debut, the company is opening up the private beta of its iOS app today to a wider number of users — you can sign up for that at GetSherpa.com. (And in a side note, today I think we’ve reached peak ‘sherpa’ when it comes to company and product names. In fact, this House believes that ‘sherpa’ is the new ‘ninja’ — discuss.)

Sherpa is headed up by founder and CEO Bill Ferrell, a Google alum who has been in the startup world for the past couple of years (most recently we heard from him when he helped to co-found Y Combinator-backed social planning service WhereBerry.) With Sherpa, he has pulled together a six person technical team with backgrounds in machine learning and the like to build an app that draws on your location data and personal information such as your calendar entries and emails to be like your “all-knowing best friend.” 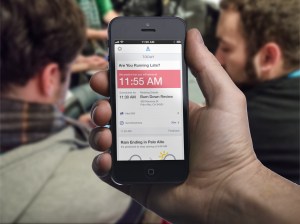 It’s a big idea, but here are a few specific examples of what Sherpa says it can do: Using data culled from your typical daily commute, Sherpa can see if there is traffic and suggest an alternate route. Knowing that you’ve got a flight to Boston that’s leaving in 2.5 hours, Sherpa will tell you that it’s time to leave for the airport — and ping you with the email containing your boarding pass while you’re on the way there. While you’re in Boston, Sherpa can keep track of the weather for you, and let you know if it’s about to start raining in 15 minutes so that you can grab your umbrella as you leave the hotel.

The key promise here is that you don’t need to open the Sherpa app deliberately to find out the weather or look up traffic — Sherpa’s app runs in the background, “pushing” information to you as you need it. It’s also because of this push functionality that Sherpa doesn’t totally kill your battery, Ferrell says. “We’re really working server side on the information, not on your phone.”

There are other apps working on things that sound like this, and the most high-profile app of them is arguably Google Now, which is so far (and somewhat notoriously) available only on Android. Ferrell says that comparison is common, but stresses that Sherpa — which has filed for a couple of patents surrounding its core technology — is different from other offerings.

“We’re fairly different from what else is out there. The basis of what we know is location. For Google Now or other people working on similar things, a lot of what they’re working on is ambient search,” Ferrell says. “Since location is the basis of what we do, we work with partners to have other ‘wow’ experiences. For instance, we can know when your coworkers come into the office and turn the lights automatically on when they arrive.”

The platform angle that Sherpa is gunning for is another thing that makes it different from its competitors. For now, again, those types of partnerships aren’t solidified and an API is not up for consumption, but the company is dedicated to working on it — and of course, that could play into a future revenue strategy.

Sherpa is clearly still in the nascent stages, but it is working in a very hot space — and has a savvy team, sharp technology, and smart money backing it up. It will certainly be one to watch in the months ahead. For now to get an early look, go to GetSherpa.com.