London-based Ethical Community, which has now rebranded as Eco Market, is an online eco-friendly marketplace – or something of an “Etsy for Eco,” if you will. The company recently launched a completely redesigned platform to accompany its name change, is adding more social features, including a Pinterest-like user interface, and has also taken in additional investment.

Eco Market has been slowly growing since its founding in 2009. The company previously had a small amount (around $356,000 USD) in seed funding from angels, including AlertMe.com CEO and ASOS.com board member Mary Turner; founding partner at Alchemy Partners, Robert Barnes; venture investor Kelvin Au; and CEO of Orange Advertising Networks, Giuliano Stiglitz.

Today, the company is announcing a further close of  £160,000 GBP, which brings in new shareholders, including Elisabeth Ling, previously in product management at PayPal, former eBay, and now at alexandalexa.com; Martin Penny, founder of GHD; Nader Alaghband, angel investor and founder of app development company Appli; Owen Li of Investcorp, and active angel; and Ivan Mazour, from the founding team of  42 tasks, and also an active investor through Innova Kapital.

More importantly, perhaps, is that Eco Market itself has undergone a major revamp.

“Our goal is to be as big as Etsy for eco goods,” says co-founder Jason Dainter. “With ‘Ethical Community,’ the name wasn’t so snazzy – it was really a bootstrapped name. We realized we had this opportunity, and we could either run with this brand that we weren’t totally happy with, and this platform that wasn’t scaling in the way that we wanted it to, or we could step back and fix what we should have fixed to start with.”

For starters, the site has been rewritten in Python, when before it was in PHP. It has also pared down, doing away with earlier features like forums and events, to refocus on social, user profiles, and sellers’ stories, the latter of which is one of Eco Market’s more interesting features. Unlike on marketplaces like eBay and Etsy where you’re buying items largely because of how they look and what they do, on Eco Market, it’s about connecting you one-on-one with the people or company behind the items. The sellers can create posts on the site or even share videos about their process. 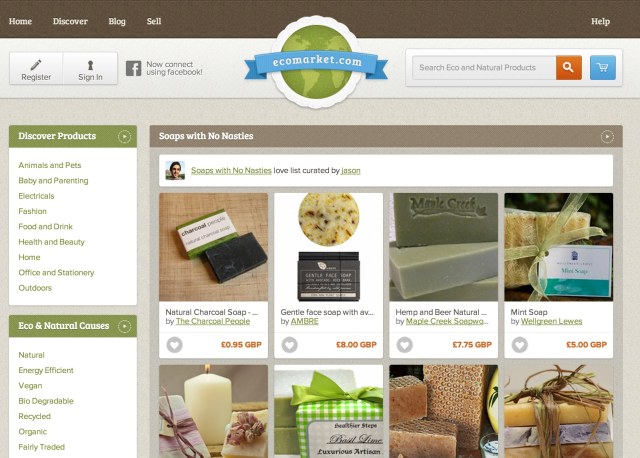 “It’s more about the story,” says Dainter. “Maybe it’s handmade, but who made it by hand? As Etsy has scaled, they’ve been struggling, as some poor-quality stuff gets into their marketplace. Just because something is ‘handmade’ it doesn’t mean that it’s not manufactured over in China, and there’s poor labor involved,” he explains of the differences between the two marketplaces.

Dainter adds that while they look up to Etsy, the company’s goal is to really capture the market of eco-friendly and natural sellers instead.

Another new feature for the revamped site is a beta version of its “love lists,” which brings Pinterest-style curation to community members who can build lists of favorite products.

“Curation is going to be a big part of Eco Market in the next few months, since now that we sell such a large range of items from a broad range of eco and natural sellers, our challenge is now being able to show the right kind of items to the right people based on their interests,” Dainter notes. “A big goal for us at Eco Market is essentially recreating the typical farmers market/eco craft fair experience in an online way.” Curation and a forthcoming activity streams feature, the latter still in the works, will help it achieve that, he says.

The company has grown from 850 sellers and over 7,000 eco-friendly products as of last February, to 1,600 sellers and over 15,000 products today. Dainter admits that the majority of those are still U.K.-based. However, 30 percent of traffic is now coming from U.S. visitors, which will help Eco Market as it moves toward its U.S. debut, which is planned for about six months out. Those moves will be accompanied by another, larger round of seed funding, something that the company didn’t want to focus on until its platform was ready to scale, as it is now.

Stateside, the eco and natural goods market is a bit more crowded, with competitors like Brian Lee and Jessica Alba-backed Honest.com, for instance, making headway. Meanwhile, sadly, one of Eco Market’s competitors, Ecomom, is shutting down. And of course, there’s still a lot of crossover between handmade, as on Etsy, and many products from natural goods sellers.

“But you could argue that eco is actually a bigger market than handmade,” says Dainter, “because it covers virtually every product on the planet.”