Crittercism, the San Francisco-based makers of a performance management and error monitoring system for app developers, announced today that it has raised $12 million in series B financing. The round was led by Google Ventures, with contributions from existing investors, Shasta Ventures and Opus Capital. As a result of the new financing, Google Ventures General Partner Wesley Chan will be joining the startup’s board.

The same three investors led Crittercism’s $5.5 million Series A round last June, and participated in its $1.2 million seed financing as well, which the startup raised after graduating from AngelPad the previous summer. Kleiner Perkins and Aol Ventures also joined the usual suspects as investors in its seed round, which, all told, brings its total capital to just under $19 million.

What is it that has these investors jazzed up about this app performance management startup? Well, when Crittercism launched in early 2011, it was initially focused on providing mobile developers with a platform to identify and analyze snafus, crashes and bugs in their mobile apps, while enabling them to provide speedy customer support. Since then, the startup has set its sights on becoming a full-service app performance management solution by not only offering standard crash reporting and diagnostics but by providing mobile developers with extras, like realtime views for “app loads, system logs, handled exceptions and transaction tracing,” as we wrote at the time.

The idea has been to create a platform that caters to both smaller, indie developers and enterprise customers in kind, providing a hosted, third-party system for app performance that can help companies reduce spend on engineering resources, allowing them to focus on the important stuff. (Like making the best check-in app for cats on the market.)

With its platform now powering performance monitoring for mobile apps on more than 500 million unique devices which have logged more than 50 billion app sessions — for customers like Netflix, LinkedIn and AT&T — Crittercism is now looking to evolve into a serious Big Data company. With its new funding, co-founder and CEO Andrew Levy says that Crittercism will look to scale quickly, growing its team of 23 to over 60 by the end of the year, particularly in the engineering department.

Levy says that, in spite of the rapid growth of mobile technology and the growing ubiquity (and processing power) of our mobile devices, mobile apps are still a black box for most mobile developers. With the app economy bursting at the seams, it has become increasingly critical for app developers to have access to flexible, scalable technology that can allow them to maintain uptime and keep the mobile experience speedy and reliable. 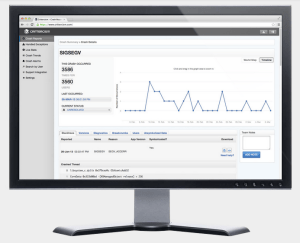 While there are plenty of options out there, Levy thinks that there’s still significant demand for tools that can not only monitor performance but provide insight into how that performance affects their bottom line. Today, mobile developers have come to depend on third-party platforms not only for distribution, but for everything from hosting, data processing and storage to location and payment processing.

So, with its new capital and Big Data ambitions in tow, Crittercism announced today that it will be adding a new service to report on the performance of outside cloud services and network conditions — those that are critical to the performance of their Android, iOS, Windows Phone 8 and HTML5 apps, whether it be Amazon hosting, Stripe for payments or Urban Airship for location services.

The new service is designed to monitor network conditions in realtime, Levy says, allowing Crittercism to report when cloud platforms like payments or location services are underperforming or failing so that developers can stay up to date and fix those issues on the fly. The network monitoring service is currently in private beta, but Crittercism is now accepting requests from mobile developers looking to test drive the new tools.

The startup is looking to turn itself into a leader in the mobile performance monitoring space by providing a system that monitors not only app performance but the entire ecosystem. Considering that has come to power over 500 million unique devices over a relatively short period of time (having launched in March of 2011), the startup’s ambitions are at least somewhat justified.

After all, the mobile performance monitoring space itself is growing fast, as it saw Twitter scoop up its crash-reporting competitor Crashlytics in January, and newcomers like Torbit and Bugsnag have been able to find traction almost from the get-go.

Of the market opportunity, Levy says: “For many of the biggest brands in the world, mobile apps have become their most important channel for communicating with customers to increase engagement and drive brand loyalty. Across all industries, organizations are recognizing the critical role of performance management to their mobile strategies and that’s only going to continue.”