Last year, James Smith and Simon Maynard left mobile gaming startup Heyzap, where Smith was the CTO, to build and launch a new venture that aimed to tackle one of the biggest problems they encountered in working with mobile developers: The need for better crash detection. In an attempt to bring some continuity to the fragmented set of point solutions developers use to monitor and capture errors in their applications, Smith and Maynard set out to create an affordable, full-stack monitoring service to allow businesses to easily track errors in both mobile and web apps, via a single dashboard.

The result is Bugsnag, which, after three months in closed beta, has already begun to find traction. Now tracking an average of 800K crashes per day thanks to adoption from the likes of LinkedIn, Storenvy, Codecademy, Treehouse, Svtle, Customer.io and DNS Simple, the co-founders are ready to open the doors to the masses.

Launching officially today, Bugsnag’s crash detection platform allows businesses to collect diagnostic information on their web and mobile applications and quickly notify development teams over email, SMS or chat when there’s a problem. Through its intelligent dashboard, Bugsnag aims to give developers increased visibility into app errors in realtime, allowing developers to find the precise location of errors, see what was happening at the time it occurred, how many users were affected and which versions of their apps experienced the problem.

To differentiate from the competition, Bugsnag has designed its platform to monitor the entire stack, allowing developers to see crashes on both their web and mobile apps. There are plenty of options already out there for this kind of service, but they tend to cater to one or the other. Crittercism, for example, focuses on helping developers pinpoint and solve performance issues in iOS, Android and HTML5 apps, while companies like Airbrake and Exceptional cater to the Web side. 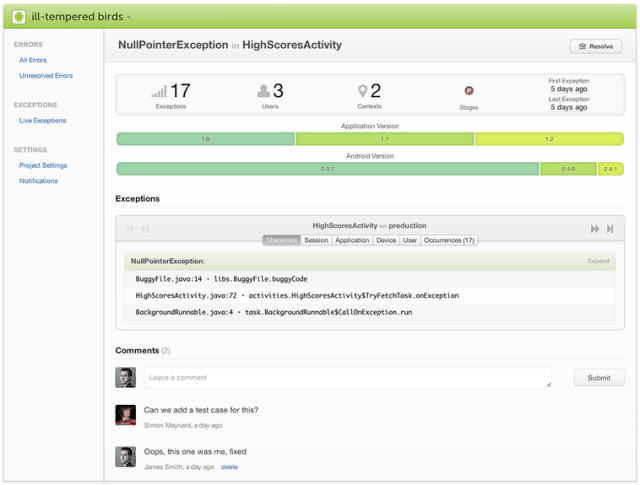 But, as Smith points out, “when the shit hits the fan, businesses want to see errors on all of their platforms,” he says. Being able to understand how backend errors are affecting mobile apps, for example, is critical to solving performance issues and maintaining a seamless user experience. Bugsnag also attempts to help developers answer the “how bad is this?” question, allowing them to see how many users are affected by each crash, which platform or version is experiencing errors, and automatically notify the right people via chat or by creating a ticket in your existing issue-tracking system.

To that point, the co-founder says that early adopters have cited Bugsnag’s integrations with major issue tracking services like Pivotal Tracker and JIRA as one of the big reasons they decided to switch over, enabling them to prioritize engineering resources and complement existing workflows by automatically creating tickets in their tracking service.

Combined with the ability to drill down to the exact line of code that led to a bug and see details on affected users, Smith says that Bugsnag is already working with a “couple thousand” customers, “a good chunk of which” are paying customers. The platform’s base plan starts at $29/month, which includes unlimited users and projects, error notification, ticket creation, encryption, 6 months of storage and code deployment tracking to name a few, and offers EC2-style, pay-as-you-go pricing for high volume customers.

With the ability to give developers multiple views on incoming exceptions — in realtime or in groups based on type — along with context-aware plugins that help eliminate noise and notification plug-ins for email, SMS (Twilio), Campfire and Hipchat (plus the create your own using the platform’s notifier api), Bugsnag appears to be off to a pretty good start.

The co-founders tell us that they’re already generating revenue and will continue to bootstrap, though they may look to raise later this year. Bugsnag is currently offering a free 14-day trial for all, but has also made its “Full Plan” available (for free) to those looking to give it a test drive. The first 25 readers can sign up for free here.