At SXSW this afternoon, Google provided developers with a first glance at the Google Glass Mirror API, the main interface between Google Glass, Google’s servers and the apps that developers will write for them. In addition, Google showed off a first round of applications that work on Glass, including how Gmail works on the device, as well as integrations from companies like the New York Times, Evernote, Path and others.

The Mirror API is essentially a REST API, which should make developing for it very easy for most developers. The Glass device essentially talks to Google’s servers and the developers’ applications then get the data from there and also push it to Glass through Google’s APIs. All of this data is then presented on Glass through what Google calls “timeline cards.” These cards can include text, images, rich HTML and video. Besides single cards, Google also lets developers use what it calls bundles, which are basically sets of cards that users can navigate using their voice or the touchpad on the side of Glass.

Here is a brief video of the Glass demo at SXSW today (via @panzer): 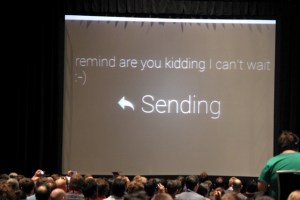 It looks like sharing to Google+ is a built-in feature of the Mirror API, but as Google’s Timothy Jordan noted in today’s presentation, developers can always add their own sharing options, as well. Other built-in features seem to include voice recognition, access to the camera and a text-to-speech engine.

Because Glass is a new and unique form factor, Jordan also noted, Google is setting a few rules for Glass apps. They shouldn’t, for example, show full news stories but only headlines, as everything else would be too distracting. For longer stories, developers can always just use Glass to read text to users.

Essentially, developers should make sure that they don’t annoy users with too many notifications, and the data they send to Glass should always be relevant. Developers should also make sure that everything that happens on Glass should be something the user expects, said Jordan. Glass isn’t the kind of device, he said, where a push notification about an update to your app makes sense.

Using Glass With Gmail, Evernote, Path and Others 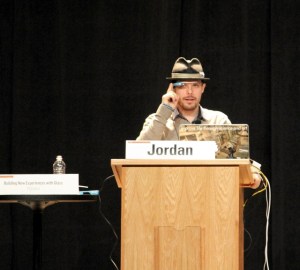 As part of today’s presentation, Jordan also detailed some Glass apps Google has been working on itself, and apps that some of its partners have created. The New York Times app, for example, shows headlines and then lets you listen to a summary of the article by telling Glass to “read aloud.” Google’s own Gmail app uses voice recognition to answer emails (and it obviously shows you incoming mail, as well). Evernote’s Skitch can be used to take and share photos, and Jordan also showed a demo of social network Path running on Glass to share your location.

So far, there is no additional information about the Mirror API on any of Google’s usual sites, but we expect the company to release more information shortly and will update this post once we hear more.

Tip of the hat to our friends at Engadget for their live blog of today’s event and to our own John Biggs for the photos.