Nokia has unwrapped a new handset — not a fancy smartphone but a budget feature phone: The Nokia 301 (pictured left) is an $85 mobile that doesn’t have a touchscreen or a QWERTY keyboard but does pack HSPA (aka 3.5G) and includes some enhanced camera features. It also supports YouTube streaming video via Nokia’s cloud Xpress browser for the first time.

Right now Nokia is holding its Mobile World Congress press conference where CEO Stephen Elop and his team are banging the drum for a newly expanded line of Lumia Windows Phone smartphones. But Nokia’s mobile strategy is two-pronged, with Windows Phone at the higher end and its own Series 40 OS powering a broad swathe of basic and budget devices, such as the 301. The thing is, right now, Nokia simply can’t afford to ignore the low end. Here, far from the glamour of Lumia smartphones, is where Nokia’s volumes are.

For all its marketing efforts to push Windows Phone, Microsoft-powered handsets still only account for a fraction of Nokia’s device sales. In its Q4 the company shipped just 4.4 million Lumias vs. 79.6 million mobile phones — mostly S40 based, as Symbian limps to its end.

A Feature Phone With Some Smart Extras

At $85 the Nokia 301 sits at a price-point Windows Phone hasn’t dipped down to yet, although Elop has said Nokia is “innovating” with Microsoft to drag Windows Phone “to lower and lower price points” (case in point: it just unveiled a new entry-level Lumia, costing circa $185 — the Lumia 520). In the meantime, Nokia is doing itself what Microsoft’s OS can’t: powering phones that are priced to fight super budget Androids. In November it was the launch of a $62 Nokia Asha QWERTY device with a Facebook button. Today it’s a brightly coloured feature phone with some smarter-than-average camera features. Nokia needs to keep budget buyers away from Android’s low end — which sets consumers on an upgrade path to higher end Android smartphones — if it is to stand a chance of convincing them to upgrade to Windows Phone-based Lumia phones later on. 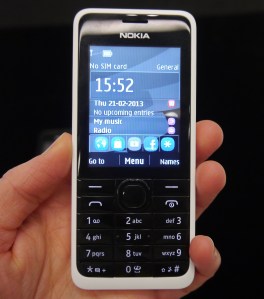 While the 301 doesn’t have the touchscreen smarts of a budget droid — or even Nokia’s Asha full-touch devices (the cheapest of which is priced at $99)  — Nokia has beefed up the device’s camera capabilities with some quasi-smartphone features: a panorama mode, which lets users take up to four separate shots and stitch them together; a sequential shooting mode that allows for up to five photos to be taken continuously; a filter application to apply a choice of five camera effects to shots; and a neat voice-guided self portrait mode to help users align their image in the frame when snapping a photo of themselves. Hold the phone up in this mode and it will bark LEFT! UP! DOWN! RIGHT! and so on until your face is in the right position for your close-up. Photos can also be shared straight from the gallery to social networks like Facebook (or to other phones via Nokia’s Slam Bluetooth sharing tech).

Nokia is also consciously styling its budget devices like its smartphones — dressing them in the Lumia range of distinctive colours (cyan, magenta, yellow, black and white in the 301’s case) — as well as borrowing other Lumia design touches, such as the metal camera plate on the rear to draw attention to the 301’s 3.2 megapixel lens (as seen below).

“For the first time now you’re seeing from Nokia one single portfolio. One single industrial design language that’s coming through from the Lumia 920 smartphone, all the way down to products like the 305,” said Neil Broadley, director of technology marketing, Nokia’s Mobile Phones division, who was showing off Nokia’s latest addition to the bottom wedge of its handset portfolio. 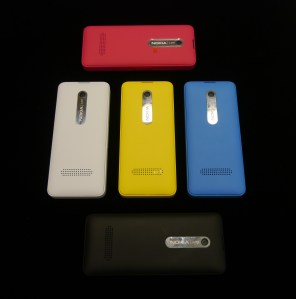 As well as fancy casing colours and camera tricks, the 301 comes preloaded with apps, including Facebook, Twitter and eBuddy. Additional apps can be downloaded from the Nokia Store, although when you’re fighting the might of Google Play it pays not to focus too much on apps. Instead, Nokia is trying to stand out through hardware design and camera innovation: so it’s borrowing some of its Windows Phone strategy here, too.

It remains to be seen whether bright colours, some camera tricks and a few key social networking apps are enough to convince the masses of cash-conscious buyers to choose Nokia’s feature phone over a budget Android. But Nokia also points to the thrifty nature of its cloud browser, which compresses webpages before delivering them to eke out more data, and long battery life (up to 39 days on standby in the 301’s case) as other areas where it’s looking out for the cash-conscious mobile consumer.

The Nokia 301 will go on sale “during Q2 this year,” and will be available in single- and dual-SIM versions. Nokia said it will be offered in multiple markets globally (but not currently the U.S. market), rather than being targeted solely on emerging markets — launching in more than 120 countries, in “Africa, Asia-Pacific, Europe, India, Middle East and Latin America.”

For the very cash-strapped phone buyer, Nokia has also today refreshed its rock-bottom entry-level device. The Nokia 105 (pictured below, right) is the successor to the Nokia 1280, and has a price tag of just $20. The biggest update, beyond the design refresh, is the screen — which is no longer monochrome but colour. The handset’s design has also been spiced up, with a single piece keymat and a couple of Lumia-esque casing colours: cyan or black. The device includes Nokia Life: its SMS-based subscription information service — but is clearly not going to get developers too excited. This phone really is a phone — in the traditional voice and text sense of the word. 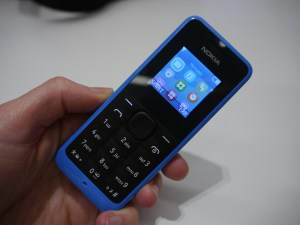 Small and feature-lite though it undoubtedly is, the 105’s predecessor, the Nokia 1280 (which launched back in November 2009) has now sold more than 100 million units globally, Nokia said today. So small and low-priced continue to do the volume heavy-lifting for Nokia, even as its top-end Lumias struggle to make an impression against Android and iOS.

The Nokia 105 will start rolling out in Q1, with the initial target markets being “China, Egypt, India, Indonesia, Nigeria, Russia, Vietnam and other markets in Africa, Asia-Pacific, Europe and the Middle East.”