Nokia has announced its cheapest capacitive touchscreen Ashas to date: the Asha 308 and the Asha 309 were unboxed in Jakarta, Indonesia. As with the rest of the the Asha range they are primarily targeted at mobile users in emerging markets.

The two Series 40-based phones are expected to retail at around $99 — undercutting previous all-touch Ashas such as the Asha 311 and 306. As well as offering more affordable hardware than the average smartphone, Nokia’s Asha devices include a proprietary cloud-based web browser — Nokia’s Xpress Browser — that compresses webpages before delivering them to reduce data consumption. Nokia claims this feature allows Asha users to view up to three times more data than they would otherwise be able to eke out of their data limit, and also speeds up web downloads — an important factor when there’s no 3G (and possibly no Wi-Fi either) on tap.

Both of the two new Ashas have 3-inch touchscreens with a resolution of 400 x 280. The Asha 309 (pictured above) includes Wi-Fi (but no 3G), while the Asha 308 (below, right) supports dual-SIM — allowing for SIMs to be changed without having to switch the phone off — but does not include Wi-Fi (or 3G). 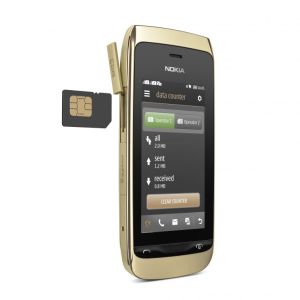 As with other recent Asha launches, up to 40 EA games can be downloaded to the phones free via the pre-loaded EA games gift app. Other pre-loaded apps include Nokia’s Social app which gathers social networking updates from services such as Twitter and Facebook into one feed. Both phones also support video streaming through the browser — a first for the Asha range.

Also today, Nokia launched an update to its Nokia Life localised information service — which provides health, education and entertainment info to Nokia owners in emerging markets. The Nokia Life+ web app is now able to provide richer information to the Asha 308 and 309 by taking advantage of their browser’s data compression technique. Nokia Life+ will also be available to a “wide range” of additional Nokia mobiles, the company said.

“People in developing economies need better access to information on the Internet that has relevance and value to their daily lives beyond entertainment. Nokia Life+ will serve as a bridge as people graduate from a primarily text-based mobile experience towards richer, web-based usage,” said Jawahar Kanjilal, Vice President & Global Head of Nokia Life, in a statement. “Nokia Life and Nokia Life+ are now available on a huge variety of Nokia phones, including the Asha smartphone range, to plug the information gap for people with or without data plans.”

Nokia is also adding another web app — called Nokia Nearby — which flags up places of interest in the mobile user’s immediate vicinity and plots them on a map. This service is available via the Xpress Browser or as a feature within Nokia Maps.