Euclid, the analytics solution for brick-and-mortar retailers that first emerged from stealth back in late 2011, is today announcing $17.3 million in Series B funding in a round led by Benchmark Capital. Also participating were previous investors NEA and Harrison Metal, as well as Novel TMT Ventures. In addition, the funding sees Benchmark’s Bruce Dunlevie, joining the company’s board.

Euclid had previously raised a $5.8 million Series A from NEA, Harrison Metal, Triple Point Capital and other angels.

Initially, the startup was going by the name “Euclid Elements,” but it has since changed that to Euclid Analytics, or just Euclid. The company likes to describe itself as something of a Google Analytics solution for the real world. That’s an especially apt description, given that COO Scott Crosby also co-founded Urchin, the software that Google acquired to eventually form the basis of what later became known as Google Analytics. Scott’s brother Brett, also an Urchin co-founder, sits on Euclid’s board. And the company more recently brought on Sandra Dolan, a founding team member at competitor ShopperTrack.

The company sells to retailers looking to upgrade, replace or implement their systems for tracking shopper traffic, loyalty, and other metrics surrounding customers’ visits. It competes with everything from old-school door “clickers” to beams mounted above the doors or even video-enabled solutions.

Euclid’s original product introduced more broadly in 2011 involves pre-configured sensors that connect with the switch in the network closet. These sensors can detect customers’ phones with Wi-Fi enabled. The system can then hash devices’ MAC addresses (the unique identifiers devices use on the network) in order to learn how many people visit a store, when they enter, how long they stay, when and if they return, and more.

It’s more data than a traditional door counter can accumulate, because it can actually track individual shoppers on a recurring basis, though not with personally identifiable information. (Allowing for customer opt-out is also a contractual requirement for retailers who sign up with Euclid, in case of any customer concerns with tracking.)

Because of the way the system is designed, it allows retailers to track customer traffic across locations and outside the main entrances, providing insight into other behaviors like whether outlets are eating into store sales, for example, or even how well window displays convert.

“It’s just been in the last three or four months that we’ve gotten down to some of the most fundamental questions about retail – questions that have been around since the dawn of retail, but haven’t been answered,” explains Euclid CEO Will Smith. For example, Euclid can help answer the question “why do lines exist?” Smith says. “With enough information about demand, they don’t need to exist. It’s making the shopping experience a lot more human. It’s real service through data.” 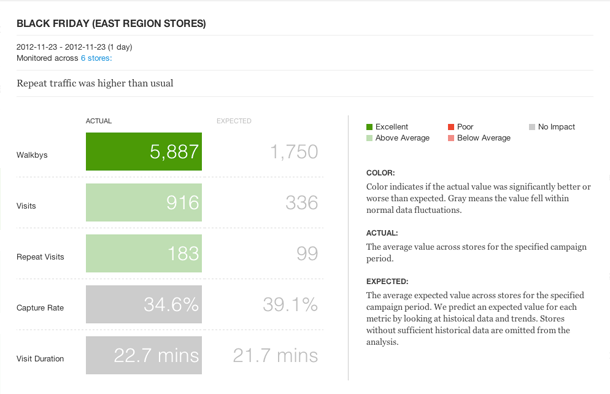 Last month, the company debuted a second solution called Euclid Zero, which involves partnerships with wireless access point providers such as Aerohive Networks, Aruba Networks, Fortinet, Xirrus and, coming soon, others. With this product, retailers no longer have to install hardware sensors, but can instead simply switch on a setting in their Wi-Fi management console. These partnerships not only make it easier for retailers to sign up, it also opens up Euclid to new markets – venues and conference centers – a vertical that Xirrus, in particular, targets.

“At this point, we’re the only analytics product for physical retail that doesn’t have an installation or hardware cost, which is pretty game-changing,” says Smith. He adds that more retailers are now inquiring about Euclid Zero than the sensor-based solution these days, and he expects it will become the more popular product in the future.

Based in Palo Alto, Euclid got off the ground by working with nearby chains like Philz Coffee, but soon expanded to larger, national chains. The startup has traction in places like San Francisco, L.A. and New York, and is now growing in secondary markets like Atlanta and Charlotte, among others.

Though Euclid doesn’t disclose its customer line-up, the company now says it’s installed in over 30 apparel chains, quick-serve restaurants and shopping malls, as well as auto parts, home improvement and department stores. It has over 50 million mobile devices tracked across its customer base.

With so many big retailers buying the company’s software-as-a-service solution, the plan is to now use the additional funding to offer these customers better and faster support, as well as increase the number of people on Euclid’s “insights team” – a group that helps the customers make better sense of their data. Smith says the company now has 27 people, and will increase headcount to 42.

In terms of product development, that’s been advancing quickly too, and will continue to do so, with more features arriving over the next couple of months.