Xamarin, the service that helps developers write cross-platform apps in C# for iOS, Android, OS X and Windows, launched version 2.0 of its platform today. This new version features updates to most of the core features of the platform, but the highlight for most developers is likely the fact that they can now use a Xamarin plugin for Microsoft’s Visual Studio to write iOS apps in C#.

Also new in this version is the Xamarin Studio, a new integrated development environment (IDE) that, as Xamarin CEO Nat Friedman writes in today’s announcement, “is tightly integrated with the iOS and Android SDKs so you can build, test and debug apps on simulators and real devices.” Xamarin Studio features many of the features developers are asking for in a modern development environment, including code completion, a modern debugger and the ability to package and distribute apps right from within the IDE (including support for distribution iOS apps with TestFlight). For Android, Xamarin also includes its own UI builder (for iOS, it uses Apple’s Xcode Interface Builder). 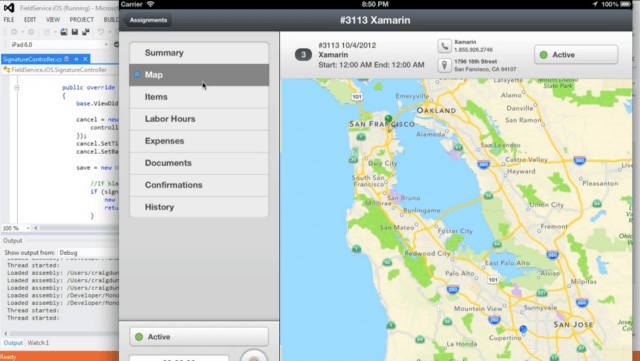 The other major new feature is Xamarin’s Component Store, which allows developers to easily add new user interface controls, connections to various third-party cloud services, charts and graphs to their apps with just a few clicks. Some of the components in the store are available for free, but many are obviously tied to paid services and have to be purchased through Xamarin.

With today’s launch, the company is also introducing a free (but somewhat limited) Starter Edition of its service that is mostly meant for solo developers. This free version can only be used to develop relatively small apps (up to 32k of compiled code) and, as expected, doesn’t come with any support. Paid versions of Xamarin start at $299 per platform/year for individuals and $999 per platform/year for larger organizations.