Tech companies try to stay lean. They don’t want to hire too many sales people, and they can’t build the perfect advertising tool for every buyer. So following in Google and Facebook’s footsteps, today Twitter and in November LinkedIn launched ads APIs. They set up a powerful value exchange: “Help us sell more ads, and we’ll give you a cut.”

If you’ve ever bought online ads with a self-serve interface, you know it basically doesn’t work. I did it on Facebook at my first job out of college. ‘Twas hell. Maybe if you’re a small business trying to spend $50 with no regard for optimization it will “work.” But if you want to spend any serious money on an ad campaign without throwing handfuls of cash into a bonfire, you need a programmatic interface.

Every business wants a different interface, though. Some want a standalone buying tool for a specific ad platform or social network. Some want it built into the same system running their search ads so they can shift spend across the channels to get the biggest bang for their buck on any given day. Some want to control all the targeting, others want artificial intelligence to hunt for the best-performing creatives and audiences, and still others want their websites automatically packaged into ads. Trying to build all these different options in-house would be impossible for most ad platforms.

Meanwhile, there’s the job of actually selling the ads to all these different types of businesses. A platform’s biggest clients often get full-service hand-holding, while their smallest have to fight through the self-serve tool. In the middle there’s a thicket of businesses across verticals and international borders. Hiring and training an in-house sales team to machete their way into these company’s pockets can be a huge up-front cost and lead to a bloated head count.

What Google and Facebook found, and Twitter and LinkedIn are now exploring, is that by offering programmatic access to their ads inventory, third parties solve the problems for them.

In exchange, the platforms allow providers of full-service advertising or ad tool licenses to earn a margin. Typically that comes in the form of a 10 percent to 20 percent cut of total spend by clients that typically goes down the more they spend. Otherwise the margin comes by charging a “cost per action” where clients pay a certain amount per click, download, or certain level of downstream engagement, and the provider keeps the difference between what they paid and what they charged. Sometimes there’s a monthly fee, too. Twitter refused to specify whether there were any restrictions for businesses built on its new ads API, saying “We’re not commenting on partnership terms.”

Regardless, the idea is for the platforms to share the wealth, and thereby align their goals with the ad tool and service providers. This way they both can make a fortune when the third parties evangelize the channel. And my oh my can ads APIs bring in the dough. 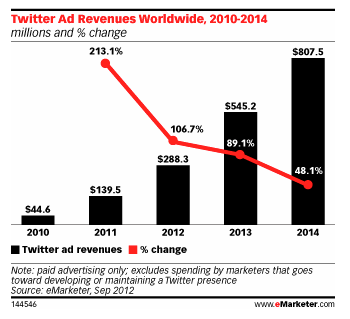 Big providers taking advantage of ads APIs can pull in hundreds of millions of dollars in sales and earn enough profit to build sizable teams, as well as invest in algorithm development and rapid adaptation to the latest API features. The money pouring out of the Facebook Ads API in particular has led many providers on that platform to be purchased. Adobe bought Efficient Frontier for $400 million, Experian scooped up Techlightenment, Adknowledge bought AdParlor, and Buddy Media acquired Brighter Option to rear itself for acquisition by Salesforce.

Facebook’s social ads API is a very different beast than Google AdWords and AdSense, so it birthed a bunch of entirely new companies. Twitter and LinkedIn are similar enough to Facebook that I bet we’ll see established adtech players scrambling to get on board. LinkedIn’s could kick off some new recruiter-specific ad tools and services, and a few interest graph and public sentiment analysis-focused providers might pop up around the Twitter ads API that launched today. But of Twitter’s five initial partners, Adobe, HootSuite, Salesforce, SHIFT, and TBG Digital, only HootSuite doesn’t offer Facebook ad buying, too.

While LinkedIn is already public and doing well, today’s ads API launch will be crucial for Twitter to hit its stride in advertising revenue before it IPOs. Twitter needs a big boost if its going to hit the $1 billion in total revenue that TechCrunch, the New York Times, and Bloomberg have actually heard are a possibility in 2013. The ads API could be the difference between that $1 billion and the much more conservative $545 million in ad revenue eMarketer projects for 2013.

Facebook learned the hard way that you have to be raking in the cash where your users are (aka mobile) when you IPO, or Wall Street will put you in your place. With an army of adtech companies hawking the value of Promoted Tweets, Twitter might see sales soar just in time for its public debut.