Until natural language processing improves, only humans can tell what’s important. So Facebook today starts rolling out the option to pay to promote a friend’s posts and get them seen by more people. This will help critical posts bubble to the top of the feed, and let Facebook earn some money, too. The feature respects privacy controls, but could still make you look like a self-important prick.

Facebook began testing the ability to promote your own posts in May 2012 and rolled the feature out to the U.S. in October. See, your average Facebook post only gets seen by about 16 percent of your friends because they aren’t online soon after you post, or you never interact with them on Facebook. Promoted Posts artificially boost your posts so they appear in the news feed to people Facebook wouldn’t have shown them to.

The option has enraged some people, making them feel like they’re being extorted to communicate with their friends. When it first came out, I said Facebook was recklessly endangering the meritocracy of the news feed, which until then only rewarded posts that got the most Likes, comments, shares, and clicks.

But there are real uses for Promoted Posts. If you’re raising money for a good cause, looking for an apartment, or have a big announcement for your company, paying to force it into more people’s news feeds can actually be really valuable, and worth the $7 or so. The price varies by geographic area and how many people it could reach. 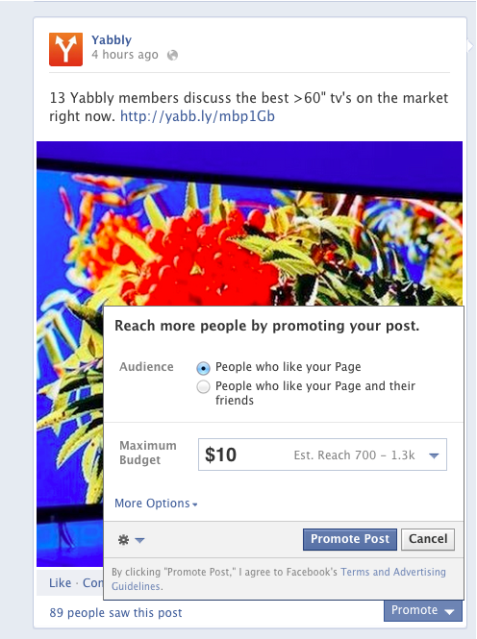 Now you can do the same for friends’ posts, or at least you’ll be able to soon. A gradual global roll-out for the feature is starting now, and it’s only available to people with fewer than 5,000 total friends and subscribers.

When you see one you think deserves more attention, you can click the drop-down arrow next to a post to sponsor it, and it will reach a larger percentage of the original audience of the post. That means promoting a friend’s post won’t violate their privacy settings. If the post was set to only show up for their friends, your payment will just make it show up to more of their friends. If their post is publicly visible, your promotion could appear to your friends, too.

Facebook explains “If your friend is running a marathon for charity and has posted that information publicly, you can help that friend by promoting their post to all of your friends. Or if your friend is renting their apartment out and she tells her friends on Facebook, you can share the post with the people you and your friend have in common so that it shows up higher in the news feed and more people notice it.” 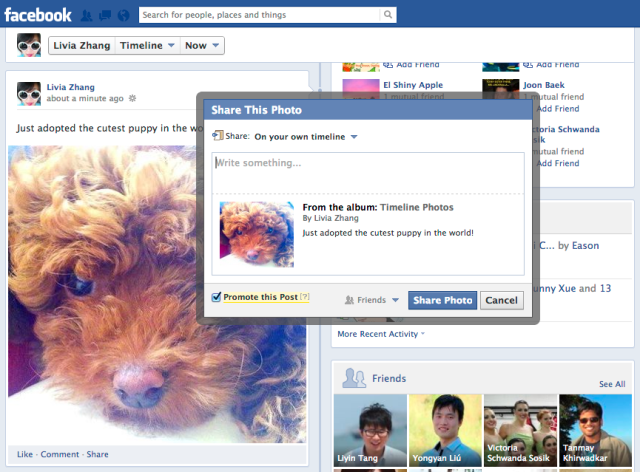 One issue, though, is that you don’t need a friend’s permission to promote their posts. And depending on what they said, the extra eyeballs might not always be appreciated.

A friend could jokingly promote an embarrassing photo of me, or my status about something bad happening to me. If I post that I wrote an article or am selling something, a friend might innocently think they’re helping by promoting the update. But when people see the “promoted” tag on my self-serving post and realize money was traded for their attention, they might think I’m tooting my own horn a little too loudly.

Facebook will have to keep an eye on this one. If people use it for evil, or people unwittingly end up looking like a loudmouth used car salesmen in cheap plaid polyester suits that reek of even cheaper cologne, then it may want to give authors the option to prevent promotions.