Tel Aviv-based SimilarGroup, a company whose recently launched web measurement tool SimilarWeb is out to topple Alexa’s stronghold in web rankings, is today announcing $2.5 million in new funding. The round was led by Moshe Lichtman, the former President of Microsoft’s Israel Research and Development Center, and as a part of the funding, Lichtman is also joining the company’s board.

The company’s other investors include Dr. Yossi Vardi, the original investor in ICQ, as well as private equity firm Naftali Investments, and Docor International B.V. To date, SimilarGroup has raised $3.5 million in outside funding.

Founded in 2009, until recently, the company was known for its suite of branded browser plugins (SimilarWeb, SimilarSites, e.g.) which offer users suggestions of other sites like the one they’re currently visiting, alongside other useful information like web rankings, traffic reach and traffic sources, for example. These plugins and others help power the algorithms behind the newly launched SimilarWeb web measurement service.

But to take on Alexa, SimilarGroup has more up its sleeve than just a couple of plugins whose main user base may be marketers or SEO professionals. The company also has an undisclosed number (actually, they told me off the record – and it’s A LOT) of consumer-facing plugins which range from social plugins to games and more. End users of these plugins may not be aware that they’re helping contribute data to SimilarWeb’s rankings, because they’re not branded “Similar–“.

Combined, the company’s suite of plugins have been download tens of millions of times, and its online portal SimilarSites.com, today sees over 10 million visitors per month. It’s a lot of data to crunch – and thanks SimilarGroups’s plugins, the idea is that the company will be able to offer better and more accurate insights than Alexa.

Alexa as a brand, says SimilarGroup CEO Or Offer, just isn’t trusted anymore. The toolbar is used by marketing people, not normal users. “And the website looks bad, with a lot of ads,” he adds. “We’ve worked very hard in this past year and a half to build SimilarWeb…We hope to be the next Alexa,” he adds.

On the back-end, SimilarWeb uses its unique technology and its “enormous amount of data,” to offer measurements that are more accurate than Alexa. It’s something the company feels confident in saying, as they do their own internal comparisons of data accuracy regularly. While Offer declined to go on record with numbers here, he is claiming that the company’s data is highly accurate when compared to the competition. Since launching around ten days ago, he says engagement and repeat visits for the new platform are high – over half of users have returned, some spending over 5 minutes on the platform.

Offer also talks of the quality of SimilarGroup’s 25-person team, noting the company has Ph.D.’s on staff with backgrounds in things like machine learning, big data, and statistics, for example. “We’re a very savvy technology company,” says Offer. “We have a huge server farm with more than 100 servers…every month, we analyze more than one billion pages around the web.”

Not only is the company betting on the quality of its data, it’s also touting some unique features which allow users to delve in deeper to things like traffic sources, rankings, organic versus paid search, social traffic, related sites, and much more. (A comprehensive look into SimilarWeb vs. Alexa is detailed here on the company’s blog). And the data is also presented in a new, more engaging way – it’s provided in a clean, modern, almost infographic-like interface. 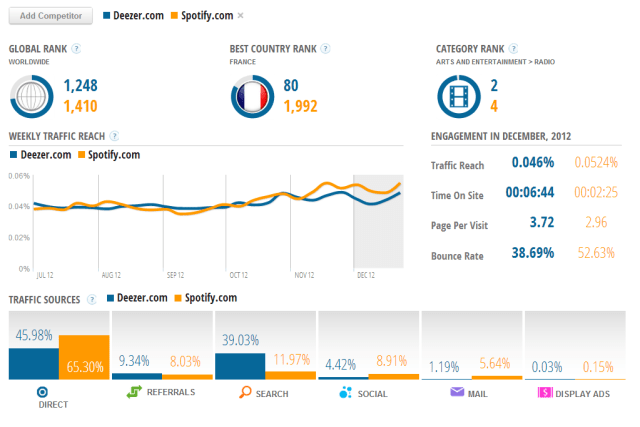 Going forward, the plan with the additional funding is to launch its “Pro” (paid) service to the public, which will serve as a source of revenue by offering users a subscription-based competitive analysis product. This will be available alongside the API packages the company has now. Offer also notes that the “ranking API” will remain free for those who want it .”We want to distribute our rankings all over the Internet. We want to displace Alexa rankings, so the ranking API you can get for free if you email us,” he tells us.

In addition to product developments, the company is planning to open offices in New York by year-end, where it will hire sales and marketing staff to sell its Pro product and other packages.