Currently, both client-side and server-side analytics are supported, and the company is planning to release a mobile solution in the future.

The company’s founders, Peter Reinhardt, Ilya Volodarsky, Ian Storm Taylor, and Calvin French-Owen, three of whom started off as roommates while at MIT (Ian was at Rhode Island’s School of Design), all dropped out to participate in Y Combinator’s summer 2011 program. Originally, the team was focused on building a competitor to Google Analytics or KISSmetrics, but they had trouble getting people to integrate with their service. However, the team had also build a library called Analytics.js that wrapped all the analytic services and APIs together, and released an open source version on GitHub.

“The open source version started growing by itself,” says Reinhardt, “so after a couple of months, we decided to pivot and build what people seemed to actually want: a beautiful, simple analytics API.” They made that shift in December. He says that around 1,800 developers have started with the open source version, which the company has no plans to take down. But in December, the team began working on building a premium version, and today, has had thousands of signups and over 300 active projects using the service.

The problem, Reinhardt explains, is that each API out there is slightly different, so businesses will want to use them for different things – one for tracking referrals, another for custom event tracking, a third for targeted emails, etc., etc. “A developer will have to sit down and figure out all these APIs, which is kind of a nightmare because they don’t feel like they’re working on the product,” he says.

Instead, with Segment.io, the developer can just use a simple API that works across all providers. In addition, it makes adding and removing APIs easy, too, saving tons of development time. Reinhardt says integrations might only take a couple of hours, for example. For companies which have previously had to integrate with the APIs from providers like Salesforce or Marketo, that time saving is even more impressive. “They have these really nasty, old APIs that are based on SOAP XML instead of REST APIs,” Reinhardt says. Some of Segment.io’s customers spent months integrating with those providers in the past, and now it takes them hours, he tells us.

The company previously only offered a browser JavaScript library, but this Tuesday, it launched libraries for Ruby, Node.js, Python, Java and .NET. They’re now focused on adding support for PHP, which is users’ top request. Plus, they’ll be rolling out support for more analytics providers going forward at a rate of two to three per week. The next one out of the gate is Pardot, which will arrive next week.

Reinhardt says the client-side, hosted version (basically, Analytics.js) will always be free, but developers will pay to use the server-side libraries. The “startup” plan is $30 per month for 1 million server-side API calls, and the premium tier is $150 per month for 10 million server-side calls, and access to premium integrations including HubSpot, Marketo, Omniture, and Salesforce. Both paid versions include email support as well. 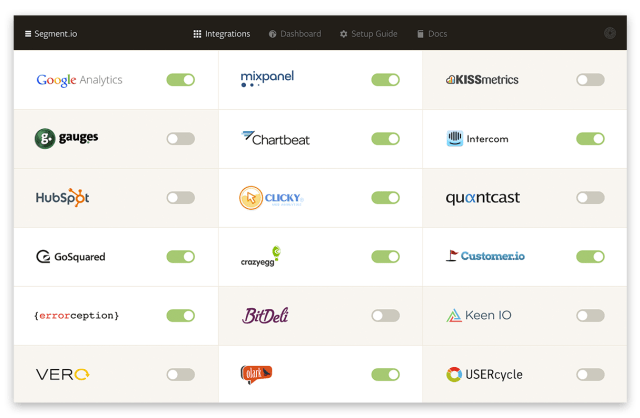 While at the end of the day, Segment.io is about saving development time, Reinhardt explains that the impacts it will have on the business as a whole are even broader. “It’s an investment [from the company] in being data-driven,” he says. If they use the simplest possible API and they make it really easy to add other analytics services, then it’s really easy to make changes. “It removes the barrier to using the analytics solutions they should be using, but aren’t, because it’s a pain to set up,” he says.

Segment.io has $600,000 in seed funding from NEA, General Catalyst, and other angel investors.