When a disaster happens, chances are you want to get in touch with your loved ones as soon as possible, either to tell them that you’re fine or to make sure they are. To make this easier, Microsoft is launching HelpBridge today, a mobile app for iOS, Android and Windows Phone. HelpBridge, which is based on Microsoft’s Windows Azure platform, lets you notify your friends and family by SMS, email or a message to your Facebook wall that you are okay when a disaster happens. Those messages can include your location, too.

For the time being, HelpBridge is only available in the U.S.

“When disasters occur, the first thing people who were impacted want to do is to reach friends and family,” said James Rooney, program manager for Microsoft Citizenship’s Technology for Good program, in a statement today. Rooney also noted that while technology was instrumental in helping people connect with friends, family and relief efforts after the recent disasters in Haiti and Japan, those efforts were very specific to the disaster region and quickly become obsolete in the time after the diaster.

That’s only one layer of the app, though. In addition, Microsoft partnered with a number of organizations like Aidmatrix, GuideStar, Mobile Giving Foundation, Network for Good and VolunteerMatch to make it easier for people to help after a disaster strikes. The app, for example, allows you to quickly send a text message to donate money to relief efforts and to make larger donations via PayPal. You can also use the app to donate goods and to find volunteer opportunities (both in your vicinity and nationwide).

This obviously isn’t the first app to try to solve this problem. There are various “panic button” apps for all the major mobile platforms that perform many of the same functions, though none of the ones that I’m aware of also include the ability to donate and volunteer.

This, by the way, isn’t Microsoft’s first foray in this area. A few years ago, the company also offered the Vine.net emergency broadcast system, though it’s not clear what happened to this project. 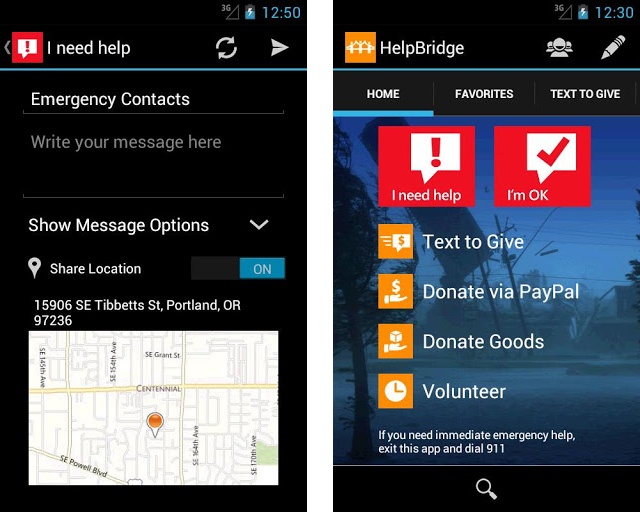