Adobe just announced that it has acquired Behance, a New York-based online platform where creative professionals can showcase their portfolios and where businesses can find talent. The site currently has about 1 million members and hosts over 3 million projects. Adobe plans to integrate Behance’s community and portfolio capabilities with its recently launched Creative Cloud service, “allowing members to seamlessly create content, seek feedback, showcase their work and distribute it across devices.” The financial details of the transaction were not disclosed.

As Scott Morris, Adobe’s senior marketing director for the Creative Pro product line, told me earlier today, the acquisition itself “came together quickly.” The Behance team was already using Adobe’s Typekit (a product the company acquired last year) and, as Morris said, were “friends of [Adobe] for a while.” Morris argues that the vast majority of Behance’s users are already using Adobe’s products anyway, so the acquisition should be a good fit. 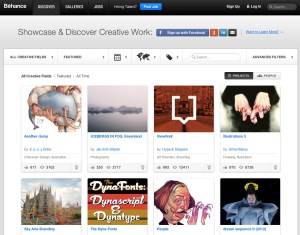 All of Behance’s 32 employees will move over to Adobe and stay in New York. Behance CEO Scott Belsky will become Adobe’s vice president of community.

Behance was founded in 2006 and was bootstrapped by its founders. This May, however, the service raised a $6.5 million Series A round led by Union Square Ventures and individual investors like Amazon CEO Jeff Bezos (through Bezos Expeditions), Dave Morin, Yves Behar, Chris Dixon, Dave Tisch, Dave McClure, Alexis Ohanian and Garrett Camp. At the time, Behance said that its users were adding about 20,000 new projects to the site every week and that its network had doubled over the last month.

It’s worth noting that Behance also powers the portfolio features for thousands of other sites, including AdWeek,the Rhode Island School of Design and The Smithsonian National Design Awards. For the time being, Morris said, Adobe has no plans to retire the Behance brand or make any changes to the product. He says that the acquisition will likely play out similar to the Typekit purchase. Typekit continues to be a standalone product, but it is also deeply integrated into the rest of Adobe’s Creative Suite.

When Adobe first announced its Creative Cloud initiative, the company already talked about how it planned to add a strong community aspect to the service. Creative Cloud, Adobe said at the time, was meant to be a “hub for making, sharing and delivering creative work.” As Morris told me, Adobe was already working on its community features and building them from scratch, but decided that it could accelerate this process through this acquisition.

In many ways, the community aspect of the Creative Cloud is the last missing piece for the service. It already offers creative professionals the tools, services, syncing, storage and private sharing features they need, but the addition of Behance will now also bring public sharing and communications features to it. While Adobe isn’t quite ready to talk in detail about what the Behance/Creative Cloud integration will look like, chances are that it will include most of the standard social networking features already available on Behance.

More details on the acquisition in Behance’s blog post this afternoon here.