AngelList, a service that matches early stage startups with investors, is today continuing its transformation from social network to investing platform with the launch of a new feature called AngelList Invest. Created in partnership with broker-dealer SecondMarket for regulatory compliance purposes, the new addition will allow smaller, accredited investors the ability to put in $1,000 or more in a startup on the same terms as the company’s larger investors.

The move follows AngelList’s launch of Docs this fall, which made it possible for seed-stage startups to close their round online. While the network had previously helped startups facilitate deals by making connections, Docs actually formalized the process by offering a standard term sheet, automatically generated closing documents, and other tools to manage the process including e-signatures, PDF generation, tools for managing wire info and more. Docs has since seen over 260 applicants added to its waitlist, and has let in twenty companies so far, half of dozen of which have successfully closed.

In total, there are currently 40,000 companies on AngelList, 16,000 of which are raising money, and 5,000 “sophisticated” investors – meaning those who are accredited, who have done at least two investments in startup companies and who have a reference on AngelList. 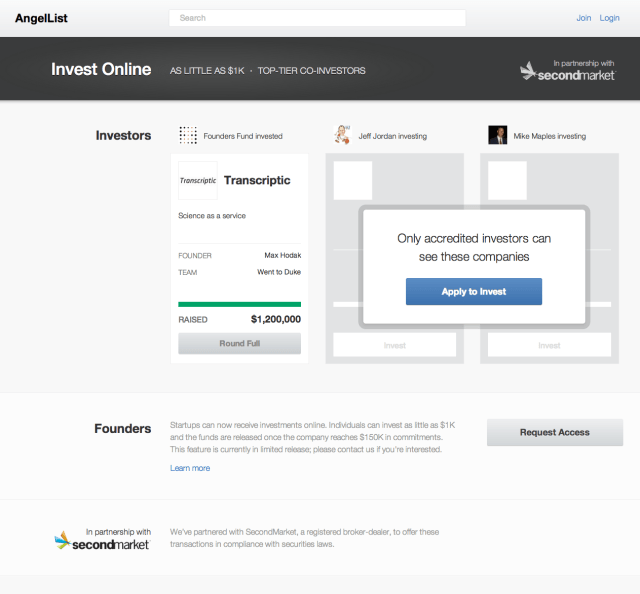 Who AngelList Invest Is For

Now with AngelList Invest, the company is introducing a way to bring smaller investors who may not have as much money to invest into the deals, explains Naval Ravikant, AngelList CEO and co-founder. “You can think of it as pre-cursor to crowd-funding, because it’s for accredited investors only,” Ravikant says. “Basically, investors can put in a few thousand dollars – or even as little as one thousand – completely online.”

The company hopes to attract a different class of investors by making this move. Smaller investors may want to put in a total of $50,000 to $100,000 in angel investments, not, say, $50,000 per investment, for example in order to diversify. They generally want to spread out their money over ten, twenty, or even thirty deals over the course of the year. “They look at it as a small part of a larger portfolio, and they may not be living in Silicon Valley and have access to top-tier deals,” Ravikant adds. He says AngelList currently has some 10,000 accredited investors on its platform today, but these people never had investor access prior to today.

That lack of access had to do with the fact that most companies didn’t want to deal with small amounts of funding like this, which is why AngelList Invest is now handling that aspect as well. Startups will only have to deal with one entity, Ravikant explains, because AngelList Invest (via SecondMarket) will create an LLC on the fly into which all the new investors will go. That way, startups only have one entity in the cap table, which simplifies things on their end. The minimum for the fund is around $150,000 while the minimum on for an individual’s investment is $1,000.

In speaking with SecondMarket’s Chief Strategy Officer Jeremy Smith, he explains that these minimums may be adjusted in time. Today’s launch is a pilot program only, so these things are not yet set in stone. In the future, he foresees the companies themselves having more control over the minimums.

In addition, each startup available on AngelList Invest will have a sophisticated investor leading the round, and the small investors will basically get in under the same terms. During the pilot program, AngelList is curating the list of eligible companies – when the round is relatively far along, AngelList will pass the info to SecondMarket. This, too, Smith expects will change as the program becomes more stabilized. At some point, SecondMarket will begin using the data the AngelList generates to discover which deals are ready.

SecondMarket will also vet the investors for suitability and their risk tolerance, and handles other broker-dealer requirements, like verifying their accreditation and handling the fund documentation and the money. SecondMarket has currently waived its fees in working with AngelList on this partnership, but may have to monetize the service further down the road. A one-time upfront fee of 10% of the investment amount is being considered.

Deals sourced through AngelList Invest will be made available on both AngelList and on SecondMarket going forward.

Prior to today’s launch, AngelList tested the concept with a startup called Transcriptic, which recently closed on $500,000 from around 50 investors. Today, there are now five live deals with $400,000+ commitments available at the time of launch, and more will arrive in a month or two.

The timing for Invest’s launch also has to do with AngelList’s plans to support crowd-funding in the future. “The general solicitation law – which prohibits people from fundraising in public – is going to be lifted next year,” Ravikant says. “When that happens, you’re going to see a lot of people who normally didn’t even know about the opportunity of investing in small startups learning about that opportunity. So it’s good mechanism for them to invest on that basis,” he adds.

It’s also good for startups, Ravikant says. “It’s a good way to get lots of small supporters as equity holders, instead of just having them provide goodwill.”

With all the tools it has been adding, AngelList’s network has quickly been morphing into a one-stop shop for seed stage companies and their backers. No wonder some are placing its valuation at $150 million or more. In addition to Docs and now Invest, AngelList also helps inform its investors, new and experienced, by providing other tools like its interactive, anonymized valuations graph. It’s also now letting startups apply to TechStars’ Boston and NY incubators here.