Open Home Pro, a startup that began as an iPad application allowing realtors to collect info from potential buyers at open houses, is today launching a new app for iPhone. Unlike its big-brother counterpart, the new iPhone application isn’t meant for open houses, but rather for posting new listings online in a matter of minutes. 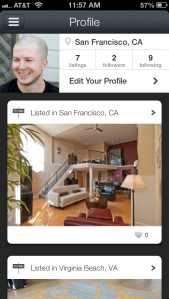 The app takes advantage of the iPhone’s built-in camera and ability to take high-res photos to help flesh out the listing details. After also entering the standard info (address, BR/BA, price, agent info, etc.), realtors can then immediately share the listing on Facebook, send it out as a pre-formatted HTML email, and even post the listing to Craigslist.

Founder Andrew Machado admits he hopes that the latter option won’t be shut down. However, even if so, that may not matter in the long run, as the plan is to eventually work with third parties like Zillow or Trulia, for example, to immediately post listings directly to services that attract buyers’ eyeballs.

But in the meantime, Machado describes the new iPhone app as the quickest way to post listings and their accompanying photos online. “Great photos exist,” he explains, “it’s just that [realtors] can’t upload them to their local MLSs [multiple listing services] because that technology was built 15 years ago.” There are some 900 MLSs out there, Machado says, and they have a tendency to make photos look worse than they actually are. He refers to MLS’s handling of photos as a “sausage machine” even, as the photos are crunched down, with a border and watermark added upon upload. “By the time they leak out to Trulia, they just don’t look that great,” he says. 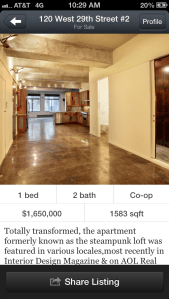 While today’s realtors can’t avoid using MLS entirely, there’s an immediacy that One Home Pro’s iPhone app can provide that would be especially helpful in markets where new listings go quickly. Realtors could be taking calls and booking showings before they or their administrative assistants ever get around to the tedious data entry that is the MLS input process.

The iPhone app also supports realtor profiles, a Twitter-like following model – which allows all the realtors in an office to quickly network with others – a favoriting feature, a section featuring trending listings, and more.

As for the iPad version of the application, it has already demonstrated a bit of traction, given the niche market being targeted. The National Association of Realtors currently has 1 million registered members across both residential and commercial markets, for example. Without buying users, with little social integration (until now), and with a fairly high price point ($12 for the iPad app), One Home Pro has grown its install base to 27,000 users since its debut last year.

Today, 15,000 leads flow through its system per month, and the email success rates for the iPad app are at 93 percent. For those unfamiliar, the iPad version allows realtors to email immediately following the open house, again when the price is dropped and, finally, when the home is sold. It also lets realtors export leads into their preferred CRM system, which is often just their iCloud address book.

The iPad and web versions (yep, some realtors are old-school) of the service have both supported photos before today, and 170,000 images have been posted to date. That number will surely grow with today’s launch of the iPhone app. The new app is available for $2.99 and can be downloaded from iTunes here. A future update will add the much-requested support for rentals, too.