Today Facebook announced its first-ever product open to people without a Facebook account. Starting now, the Messenger for Android app, and later its iOS counterpart, will allow signups from non-Facebook users with just a name and phone number. Facebook seems to have realized the limited reach of Messenger as is and wants to let you message your contacts whether or not they’ve joined Facebook.

The rollout of Messenger for non-Facebook users begins today with the Android app in a limited set of countries, including India, Australia, Indonesia, Venezuela, and South Africa but will reach the rest of the world shortly. Messenger for iOS will also take signups with just a phone number and name eventually, but Facebook doesn’t have a timetable for when. Facebook mobile product manager Peter Deng will formally reveal the update on stage at LeWeb later today.

When non-Facebook users sign up, the app will suck in their contacts. Then they can be selected by name to start a message or group message thread. The expanded reach will help Facebook challenge SMS, as well as third-party, free texting apps like Pinger and WhatsApp, which we’ve heard Facebook has been considering acquiring. Messenger for Android will be free and for now will show zero ads, giving it an advantage over similar communication apps that are paid or ad-supported. If Facebook did end up acquiring a messaging app, it could potentially be operated independently as a paid, customizable counterpart to Messenger. Alternatively, if WhatsApp turned down its offers, this could be Facebook’s plan to steamroll it. At the very least it confirms Facebook’s interest in expanding its footprint in messaging.

Making product available to non-users is a bold but humble move for the company. It shows Facebook accepts that not everyone wants an account on its social network, but that it still hopes to provide those who do with the maximum utility. By getting non-users on Messenger, existing users won’t have to pay to SMS them or send them photos. Don’t expect a non-Facebook-users version of Facebook’s standalone Camera app because Messenger is entirely private and doesn’t rely on any other Facebook products like news feed. 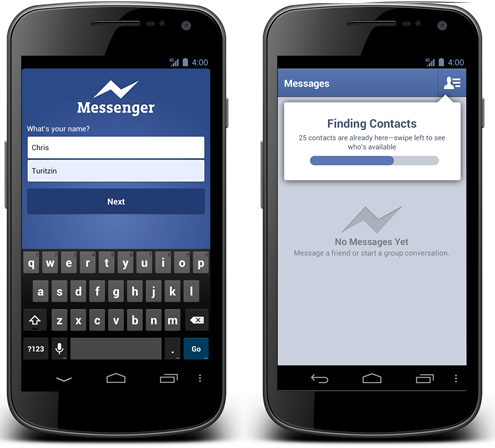 At first glance this might seem to signal the end of Facebook’s high-growth startup phase. However, non-Facebook Messenger could provide a stepping stone to signups or reactivations for those who haven’t found the need for Facebook, are holding out, or deleted their accounts. The fact that its rollout starts in India where Facebook has just 65 million users out of a population of 1 billion is another indication that Facebook is still seeking signups.

Now instead of having to fill out an entire profile, manage friend requests, and deal with Facebook’s privacy controls, someone could just use Messenger. That’s an easy sell to skeptics and cynics because it can help them avoid SMS charges. Once they’ve seen the value in Messenger, people might be willing to take the plunge and get an account. The release aligns with Facebook allowing Android Messenger users to text non-Facebook users from within the app, which began in September.

At LeWeb, Deng explained “The SMS protocol has been around for 20 years. It’s designed for these old phones, and they don’t take advantage of the location features, the touch screen, the picture taking that today’s phones have and that’s why we invested in it.” He also mentioned non-Facebook Messenger is coming to feature phones, too.

Today’s announcement is Facebook’s latest shot in the war to control messaging in the post-SMS era that it’s fighting with Apple and Google. It leverages Facebook’s independent, device-agnostic, social layer approach to mobile. Rather than being locked into the iOS or Android operating systems, or now to only Facebook users, Mark Zuckerberg’s company can court nearly anyone on Earth. Non-Facebook Messenger will really take off when it’s eventually released for feature phones that are popular in emerging markets where Facebook’s penetration hasn’t topped out and it has room to grow.

You can download the new version of Facebook For Android now, though you may have to wait to receive the rollout of non-Facebook signup.