Google Fellow Ben Gomes took the stage at LeWeb Paris and announced that Google’s Knowledge Graph project is now available in a number of new languages, including Italian, French, Japanese and Russian (we’re still trying to confirm whether Google added other languages, too). The Knowledge Graph project, which is one of Google’s main projects in search at this point, was only available in English until now.

In August, Google brought Knowledge Graph to all English-speaking countries after first launching in the U.S., but today’s expansion is the first time the company is bringing this product to other languages, as well. 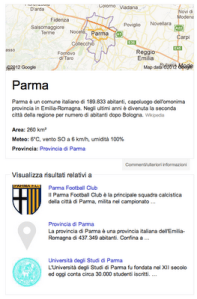 Gomes started his talk by describing Google’s reasons for working on the Knowledge Graph problem. The real world, Gomes said, is about things and not the kind of strings we type into Google Search. For the most part, this was a reiteration of the kind of things Google has long said about this project. The Knowledge Graph, he said, makes the web more like a library that allows you to explore connections you wouldn’t usually find.

The big challenge for Google, though, is to internationalize the Knowledge Graph. Even in English, the differences between how people in India, Australia, England and the U.S. use it is often widely different. Because the Knowledge Graph “knows” about millions of different objects, it also needs to know if somebody who is looking for “Chiefs,” for example, is looking for the Kansas City Chiefs or the Chiefs rugby team.

Looking ahead, Gomes said that his dream is the “Star Trek Computer.” That’s still fantasy right now, but we are starting to understand key concepts like voice recognition and natural-language processing. In his view, it will still take a long time before we get to a really intelligent search experience, but he thinks we are on the right track.