Google today is announcing a refreshed version of its native app on iOS devices, with the launch of Gmail 2.0. The app most noticeably introduces a cleaner-looking user interface, but it also brings a number of flourishes to improve the overall experience, including the addition of profile pictures in messages, new animations, infinite scrolling, and more, as well as a hugely in-demand feature: support (at last!) for multiple accounts.

[See update at bottom of post. Some users reported trouble updating their app.] 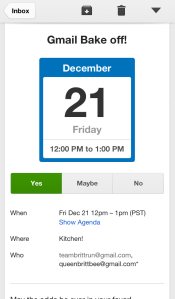 The update is a solid one, especially for an app that hasn’t always impressed. Also included are new time-savers, including autocomplete predictions that appear when you type in the search field, and integration with Google Calendar. That is, you can now RSVP to Google Calendar invites from you mobile. Google+, of course, gets shimmied in there too, with added support for +1’ing and commenting directly on Google+ posts directly within the app.

For users with multiple Google Accounts, however, the most exciting update is the ability to quickly switch between accounts from the menu. In the left-side navigation, you can choose between up to five Google Accounts, each with their own icon and notification flag showing unread messages. 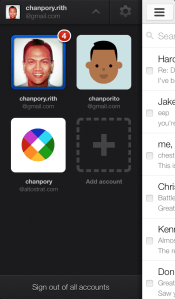 Although Google made no mention of it in the blog post, the quality of the new app compared with that in the past seems like it may be influenced by work from recent Google acquisition, Sparrow, which had previously built apps for Mac and iOS. The team joined Google’s Gmail team to “accomplish a bigger vision.” If this is a first glimpse at what that vision looks like, then it’s certainly a welcome one. (Update: Surprisingly, it’s not Sparrow-infused.

The updated iOS app comes shortly after an update to the Android version, which yesterday added features for Android 4.0+ users, including new gestures like pinch-to-zoom and swipe-to-delete, larger photo previews and a gallery view for attachments, the ability to auto-fit messages to the screen, and more.

Update: Here’s something odd. One Gmail user, Jason Cust, is reporting that he experienced a glitch when trying to update the Gmail app – and is seeing a message reading “the item you tried to buy is no longer available.” Others on Twitter are now getting the same message. Stay tuned.

Update 2: It’s just a rollout issue, says Google. You can download the app here, or update your currrent version. “The app wasn’t pulled,” a Google spokesperson told us. “Just looks like it’s still rolling out – we just issued this update tweet….users can update their old Gmail app to get version 2.0.”