Facebook can now save photos you don’t publish, which effectively makes it a cloud storage locker. Today it starts rolling out its Photo Sync background uploads feature to all users after having tested it on Android since August and iOS since earlier this month. It could get a lot more photos by eliminating upload friction, but it will also pull in lots of juicy photo metadata to aid its ads business.

We’ve covered how the feature works before but essentially you turn it on through a “Sync” button at the bottom of your photos in your primary Facebook for iOS or Android app. It then begins auto-uploading all the photos you take to a private folder. You can then go to the Photos section from the navigation menu on the app and open the Synced section at the bottom – or the Synced From Phone section at the top of your photos section on the desktop – to select which photos to share with friends. 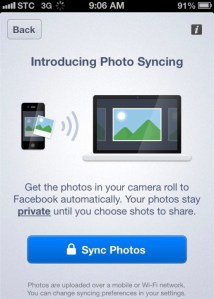 Facebook does some smart stuff with data and battery to make Photo Sync fit nicely into your life. Facebook says that “When you’re on a cellular network like 3G or 4G, we’ll sync photos at a smaller size (around 100K each),” and it will sync bigger versions over Wi-Fi. In the Sync settings you can turn off cellular uploads to avoid burning your data plan, or turn it off entirely. Facebook won’t sync photos when your battery is low — a nice touch. Right now you can save up to 2 gigabytes of photos for free.

Since we already knew about the functionality, the most interesting thing about today’s rollout is all the data it can mine from Photo Uploads and how the feature positions Facebook going forward. Facebook wants to help you share your life. You capture more angles and perspectives of your life through your camera than you might want to share. That means it can either make you decide what to upload and what to share, or eliminate the first decision, take care of that seamlessly in the background, and only ask you to choose what to publish.

For some, the real bottleneck for sharing mobile photos was the upload process that requires boring wasted seconds staring at a progress bar. With that eliminated, people might be willing to share a dozen photos when they might have previously shared just one. That means more tags of friends to draw them back to the site, and more content for them to view in the news feed.

But on the back-end, Facebook gets to chow down on a ton of extra data. Just because you don’t share them doesn’t mean Facebook doesn’t suck in the geo-location data from your photos that can help it refine your news feed and show you more relevant ads for nearby businesses.

While Facebook has a nice little partnership with Dropbox to power filesharing for Groups, Photo Sync does look a lot like Dropbox Camera Upload. Facebook might not be renowned for its security (even though it’s actually very safe without big breaches to date). It has all your friends right there to share with, though, and could be a very convenient place to save your memories — something Dropbox wants to be. Sure Dropbox wants to be a lot more, a true data fabric that connects your devices, but photos are probably people’s most precious data.

Next Facebook could up the stakes by dropping the 2-gig limit and allowing download of private photos. Facebook already has a Download Your Information feature, and letting you move photos from your phone to your laptop via Photo Sync could be helpful.

I believe both Facebook and third-party apps on its platform are just beginning to unlock the value trapped within the 219 billion photos that have been uploaded to the social network. Recognition of not just faces but brands could identify what products you use. If Facebook sees you have Coca-Cola cans in a lot of your privately uploaded Photo Sync photos, maybe Pepsi would like to try its hand at winning you over with some ads. Auto-upload photos where it’s raining? Maybe you’d like some ads for movie theaters.

Photos were already one of Facebook’s richest and most abundant resources and it’s about to strike oil.