It’s not just for Android anymore. Facebook has figured out how to enable background auto-uploads and is now testing Photo Sync with a few iOS users. A tipster got us a screenshot and Facebook confirms iOS Photo Sync is a continuation of its two-month old test for Android. It could box out Google+ Instant Uploads and get people to share more photos — Facebook’s lifeblood.

Here’s how Facebook Photo Sync works, at least for those lucky enough to be in the test. And fair warning, it probably won’t be there for you and Facebook could scrap the feature instead of rolling it out. In any case…you go to the Photos app in the Facebook For iOS app’s sidebar navigation or the photos section of your Timeline and scroll to the bottom. There you may find an option to check out Photo Sync and then enable it, as seen in this photo sent in by tipster YoloFahad (an Instagrammer-extraordinaire). 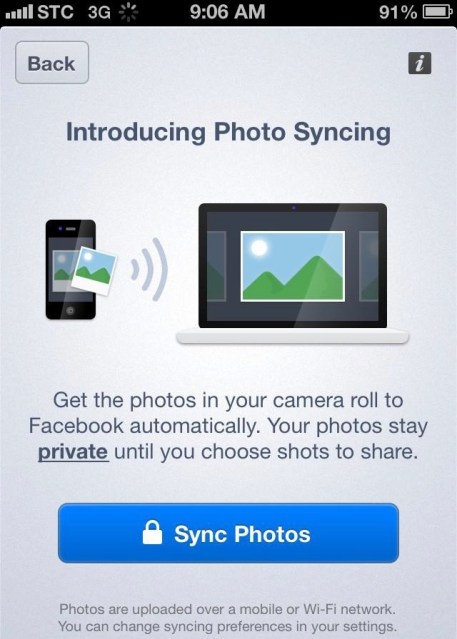 Facebook will then automatically upload photos you shoot to an unpublished album only you can see. From there you can authorize which photos you want posted. More details on enabling and disabling Photo Sync can be found in the Facebook Help Center, which we discovered now notes the feature’s presence on iOS. By default Facebook tries to upload photos immediately, but you can configure it to avoid burning your data plan.

The feature is a big deal for Facebook since photos are a core driver of return visits and time on site. Most people take way more photos with their phones than they upload to Facebook and the social network wants to close the gap. Instead of having to manually choose photos and wait for them to upload, Photo Sync makes this all very low friction, which could drastically boost the number of photos people publish.

So why didn’t Facebook already have this for iOS? Two reasons. The first is privacy — a delicate thing when you’re talking about auto-uploading photos people might not want anyone to see. Facebook had to make sure it had the messaging perfect so users wouldn’t panic,  wrongly thinking their grandma just saw their private, booze-soaked, scantly-clad pre-party photos.

The second reason is more technical. On Android where developers can basically do whatever they want with anything on the phone, engineering Photo Sync was easy. Facebook started testing the feature there in September, as reported by The Verge. On the rigidly controlled iOS? Not so simple. Update: Facebook says it’s using background uploads to accomplish the feat, and isn’t relying on location APIs or its deep integration with iOS 6. 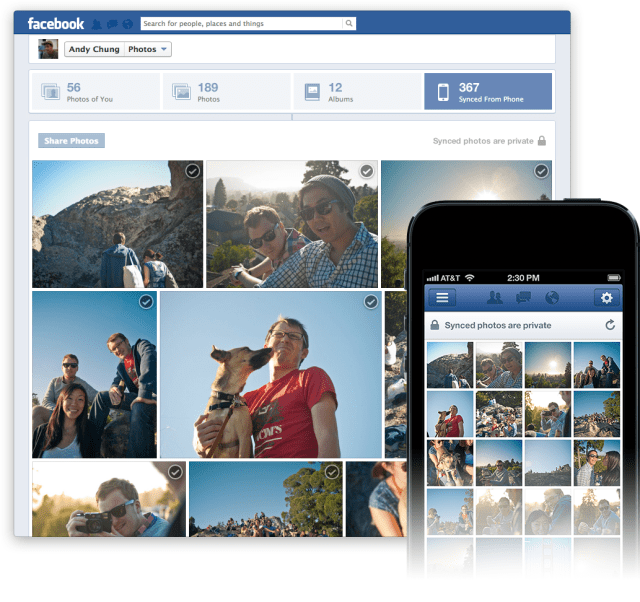 The feature could keep Google+ Instant Uploads from becoming a threat. Google started showing off the feature in June 2011. Then at the I/O Conference a year later it  announced a cool integration with Google+ Events called Party Mode which immediately stuck out to me as a selling point over iOS and Facebook. In fact, I’ve heard hints that Facebook may be working a Party Mode competitor.

Photo Sync shouldn’t pose a serious threat to Dropbox, which focuses on backing up all your photos instead of prepping them for sharing. However, some startups like Bump’s Flock could lose some differentiation, though it gets the auto-upload job done and is currently open to everyone.

Right now, between the 300 million images uploaded every day and its acquisition of Instagram, Facebook is winning the photo race by a mile. If it rolls out Photo Sync to all iOS and Android users and it catches on, it’ll take an Olympic miracle for anyone to catch up.