Microsoft made a big push to ensure that when Windows 8 went live in October, the apps in its Windows Store would not disappoint, claiming it would have more apps than any other platform at launch, and then cracking 20,000 apps within the first month. Now, according to new figures from Distimo, the store has followed through with strong download activity: the daily download volume of the top 300 apps is already three times higher than that of the top 300 in the Apple Mac Store.

But bigger doesn’t mean more valuable — not yet, at least. With some 86% of all Windows 8 apps free, Apple continues to generate five time the revenues on its Mac Store. At the moment, Microsoft itself is proving to be the highest-grossing app publisher. (Full table below)

The Windows 8 store’s applications are geared towards tablets and PCs, so if you are comparing it to Apple’s app business, this puts it between the Apple Mac Store and Apple’s iPad-dedicated apps on the main App Store. It’s quickly surpassed the former, which Distimo says currently only has 13,000 apps, but it is very, very far behind the latter, which in October passed the 275,000 mark. Comparing it to Apple’s entire main app store, with 700,000 apps, or Google Play with over 600,000, is even more dwarfing. Even the existing Windows Phone 7 store  is ten times as big.

At the moment, Microsoft has managed to keep a balanced mix between the different interfaces being served through the store:

One area where Distimo says Windows 8 has been particularly strong is in localized content: on average more than 10% of apps in the top 300 rankings are popular to specific countries. Distimo notes that when considering bigger markets, where developers are more likely to make language-specific apps, the proportion is even higher. In Japan, for example, 41% of the top apps are local to Japan; 30% of Korea’s top apps were Korean-language.

The strong local proportion, Distimo notes, is because of two reasons. One, Microsoft has been effective at marketing them to local audiences. Two, there are actually a higher proportion of local apps. The percentage of apps that are U.S.-only in the Windows 8 app store is 65%, compared to 85% and higher in most other app stores.

While the Windows 8 app store continues to grow, one big question will be whether Microsoft manages to navigate more paid content, and more purchasing by consumers, to the platform. Creating an environment where many of the apps are free may make charging for content more challenging in the future — as it has been on the web.

Moreover, for now it looks like different devices are delivering different price points in the store:

Microsoft itself just today posted an update to how it’s monetizing that app store. In a short announcement that Windows 8 had passed 40 million licenses sold, it noted that “a number of apps in the Windows Store have crossed the $25,000 revenue mark.” Unlike developers on the Android or iOS platforms, Microsoft has sweetened the deal and offered developers an 80% cut on revenues from downloads.

One solution for growing revenue may not be in the monetization of apps, says Distimo, but in the Windows 8 being used as a vehicle for downloading and updating heftier (and pricier) system software.

“The app stores have proven to drive a lot of downloads, so it will be very interesting to see how the Windows Store [software] will perform over the coming years,” the company writes. “Distimo believes the Windows Store will become an important channel in digital software distribution, which is why the company already offers support for this on the app store.” 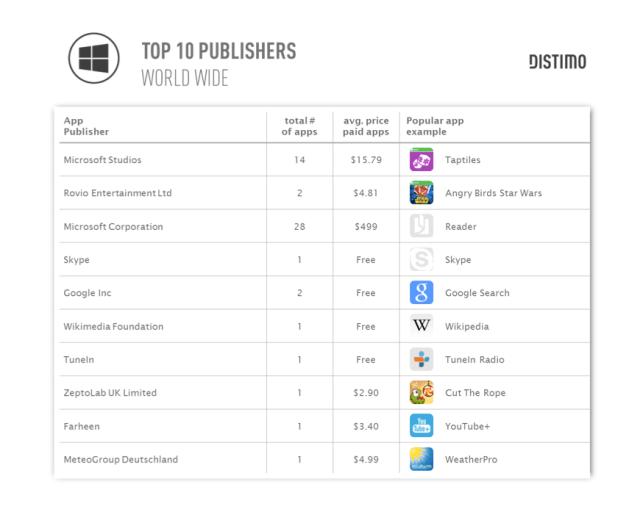