Glassdoor, the jobs and career community website offering company reviews, salary comparisons and job listings, is today announcing an additional $20 million in outside funding. The Series D round was led by new investor DAG Ventures, and saw participation from Glassdoor’s existing investors Benchmark Capital, Sutter Hill Ventures, and Battery Ventures. To date, Glassdoor has raised $42.2 million in outside funding.

The four-and-a-half-year-old company has been growing rapidly following the launch of a feature called “Inside Connections” earlier this year. For those unfamiliar, Inside Connections is a Facebook-enabled job-hunting tool that allows Glassdoor users to see where their Facebook friends work. The idea is reminiscent of other startups like BeKnown and BranchOut, the latter of which raised a similarly priced Series C of $25 million in April. Also competing in this space is Identified, which scores job seekers based on how in-demand they are. This startup, too, raised a good-sized $21 million Series B this June. 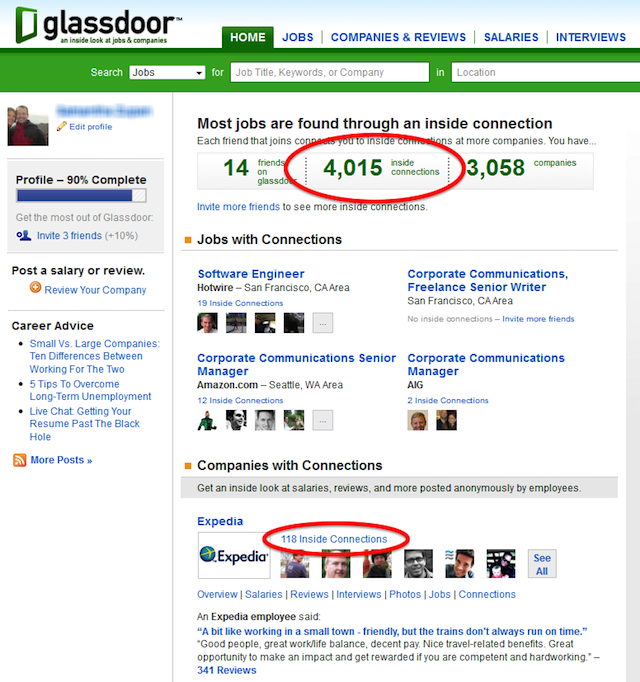 But the difference with Glassdoor’s “Inside Connections” is that the Facebook data is only used to augment Glassdoor’s content, as opposed to being the key product. Generally, users don’t just visit Glassdoor to find out who works where; they visit for the other content the site hosts, including company reviews, ratings, salary reports, interview questions and reviews, job listings, and more.

“We’ve grown now to about 3 million pieces of content on 200,000 companies in the world. We have data from about 190 countries. And when we took all of that, and laid it on the social graph, it was really valuable for users,” explains Glassdoor CEO Robert Hohman. “We did a really good job prior to Facebook for telling you what you needed to know about a company…but by connecting with Facebook, we could finally tell you who you should know at a company.”

Hohman says that deeper integration with Facebook has been the focus over the course of 2012, but things really hit critical mass this summer. “The result is now we’re seeing about one new user every two seconds join Glassdoor,” he says. That’s 600 percent year-on-year growth. Over the past year, traffic to Glassdoor.com has grown 160 percent to more than 13 million monthly unique visitors. When new users are introduced to the service, they find it helpful, Hohman adds, and one in 10 users ends up leaving content on the site.

In addition to user growth, Glassdoor has also seen revenue growth of 175 percent over the past year, but Hohman declined to provide exact figures. The company sells various packages to its 800 employer partners, offering branding and analytics solutions, as well as a way to target users as potential job seekers. Because the site is a destination for job seekers who have the luxury of researching employers for fit, many employers want to advertise what it’s like to work at their respective companies, as well as what benefits they offer, for example. They can also track how their brand is perceived in the community, what other companies job seekers looked at besides them, and how they rank against their competition, among other things. Plus, because 98 percent of Glassdoor users connect with Facebook, the site is also able to help employers target job seekers by matching up potential positions based on social profile data.

With the additional funding, Glassdoor will now grow its sales team and focus on international expansion. Forty percent of its audience comes from outside the U.S. – a notable figure, given that the site is English-only at present. “We weren’t expecting to be 40 percent international at this point,” he adds. “That is what happens when you start to be successful with Facebook – it rips you in the direction of international.” Mobile is also in its sights, Hohman tells us, and promises they’ll have more announcements on that front soon.