Mosaic, the new app from Mixbook that lets you create photo books right on your iPhone, is making its public debut today. The app is beginning to roll out to those who had previously requested early access, before becoming more widely available next week. Mosaic has been designed as the easiest way to build a printed photo book using the photos found on your phone, and on that point, it delivers.

The app was created by the same team who originally built Yobongo, a location-based mobile chat application which was acquired by Mixbook in March. While Mixbook is now Mosaic’s parent company, the efforts at Mosaic had been in stealth mode until September, which is when they were first able to reveal what they had been building. Mixbook, for those unfamiliar, offers tools which allow users to build photo books, photo cards, scrapbooks, yearbooks, calendars and the like, but its products had been built for the desktop age. Mosaic, on the other hand, was built from the ground-up for mobile.

While Mosaic is not the first mobile app to offer the ability to print photos in book format, it’s certainly one of the quickest tools for doing so. Recently, I experimented with Keepsy, for example, and I found the Mosaic experience superior in terms of its user interface and general flow. There is a lot of attention to detail in Mosaic’s app, like the way the color scheme and animations match the colors and design of the actual printed product, for instance.

However, one of the app’s best features is something which you would think would be more common, but is still remarkably rare in mobile photo apps in general: you can actually see the images you’re selecting very clearly. A large number of mobile photo-sharing apps present you with photo thumbnails that are small, mirroring the layout of the iPhone’s Camera Roll. But when you’ve shot a lot of images of the same thing (which is common for moving targets like kids, pets, sporting events, or concerts), it’s difficult to see which images are the best. In Mosaic, the thumbnails are larger, fitting only three instead of four photos across the iPhone’s screen. This is a minor, but critical change, because it speeds up the time it takes to preview photos while creating your book.

As the photos are chosen, they appear in a scrollable section below the thumbnail gallery, and you can tap them again to see them full screen, then opt to “keep” or “delete” the photo from your current group. You can drag-and-drop them around to adjust the order, then tap “Done” to compete your order. Mosaic allows you to pick 20 photos from your Camera Roll, albums, or Photostream, which are then printed to a 20-page book for 20 dollars.

The app worked smoothly, but the focus on simplicity and ease-of-use had it lacking a few features, such as the ability to add captions, dates, a title page, or even saving your photo book as a work in progress. Some of these decisions, including the hard 20-photo limit, were intentional, though, explains Mixbook’s Director of Mobile, Caleb Elston. “With most of these photo books, because there is no limit, essentially – sometimes there’s a 250-page limit – you’re never done. You can always choose to add more,” he says. “I think that makes it stressful for people. They keep wanting to tweak it and adjust it. But when you just pick 20, you know you’re done.” He adds that having “drafts” also creates a tension for people, and they’ll just wait to complete their order. 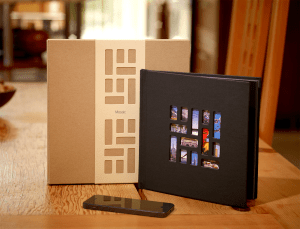 By not including other things like text, captions and various layout options, the process of making the book is very fast. However, the app may be updated in the future to include some minimal additions, like being able to include a title page, or maybe a feature that would allow you to re-order more copies of the same book, for example.

As for the resulting physical product, it’s a 7-inch, hardcover book with either white or black pages and which includes a custom cover with cutouts featuring – you guessed it – a mosaic of the photos the book includes. The book arrives in custom packaging four days after ordering, and the app will soon allow you to send personalized gift messages, too, just in time for the holidays. If you previously signed up for Mosaic, you should be getting your invite starting today. Others should check the App Store in a week’s time.