The focus of this release is clearly on web standards and other developer-centric features. Opera will now, for example, provide developers with access to its Context Menu API so extensions can easily manipulate Opera’s right-click menu. This release also marks the launch of Opera’s Screenshot API, which, as the name implies, makes it easier for extension developers to add screenshot features. 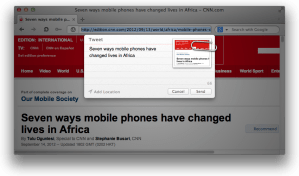 Visually, there are no major updates here, except for the built-in share feature on OS X Mountain Lion and Retina Display support (something Firefox won’t offer until January).

Besides the developer features, SPDY support is probably the most important update here. Now that sites like Twitter, Gmail, and WordPress and others support SPDY, it was only a matter of time before Opera, too, would support this protocol.

While Opera remains one of the most popular browsers on mobile, its market share on the desktop is close to negligible, and while it used to be one of the fastest browsers on the market, it’s currently in danger of falling behind.