Locu, a Boston-based local business data provider born out of Sir Tim Berners-Lee’s lab at MIT, is today officially launching its commerce dashboard for merchants. The company, which raised a $4 million Series A round led by General Catalyst in April, offers a proprietary system that can extract structured data about local businesses from their not-so-structured websites. Locu’s initial focus was on restaurant data, which now accounts for around 80% of the data Locu has on hand.

According to Co-founder Rene Reinsberg, Locu has data on over half a million businesses, and is now turning its attention to other types of local businesses, including hair and nail salons, spas, and other types of small retailers. The company also recently debuted its API during TechCrunch Disrupt, allowing developers to pull in menu, pricing and hour of operation info from local restaurants into their applications. Reinsberg says that several hundred companies are now using the API, including a few big-name partners, but Locu will have specific announcements related to who those are in a few weeks time.

Locu’s technology, for those unfamiliar, combines both machine learning techniques and crowdworkers to bring structure to business data found on the web. The workers, essentially contract employees, are trained to clean up and adjust the data that the machine-learning side of the system hasn’t managed to translate 100% correctly.

Now that the company has built up a sizable collection of restaurant menu data and that from other small businesses, it’s opening up to business owners who want to log in and take ownership of their own profiles in order to update their price lists, specials, menus and services on their websites, mobile sites, mobile apps, Facebook pages or in local search directories. All the changes the business owners make on the Locu dashboard updates those menus and price lists all at once, provided they’ve integrated with Locu’s service. 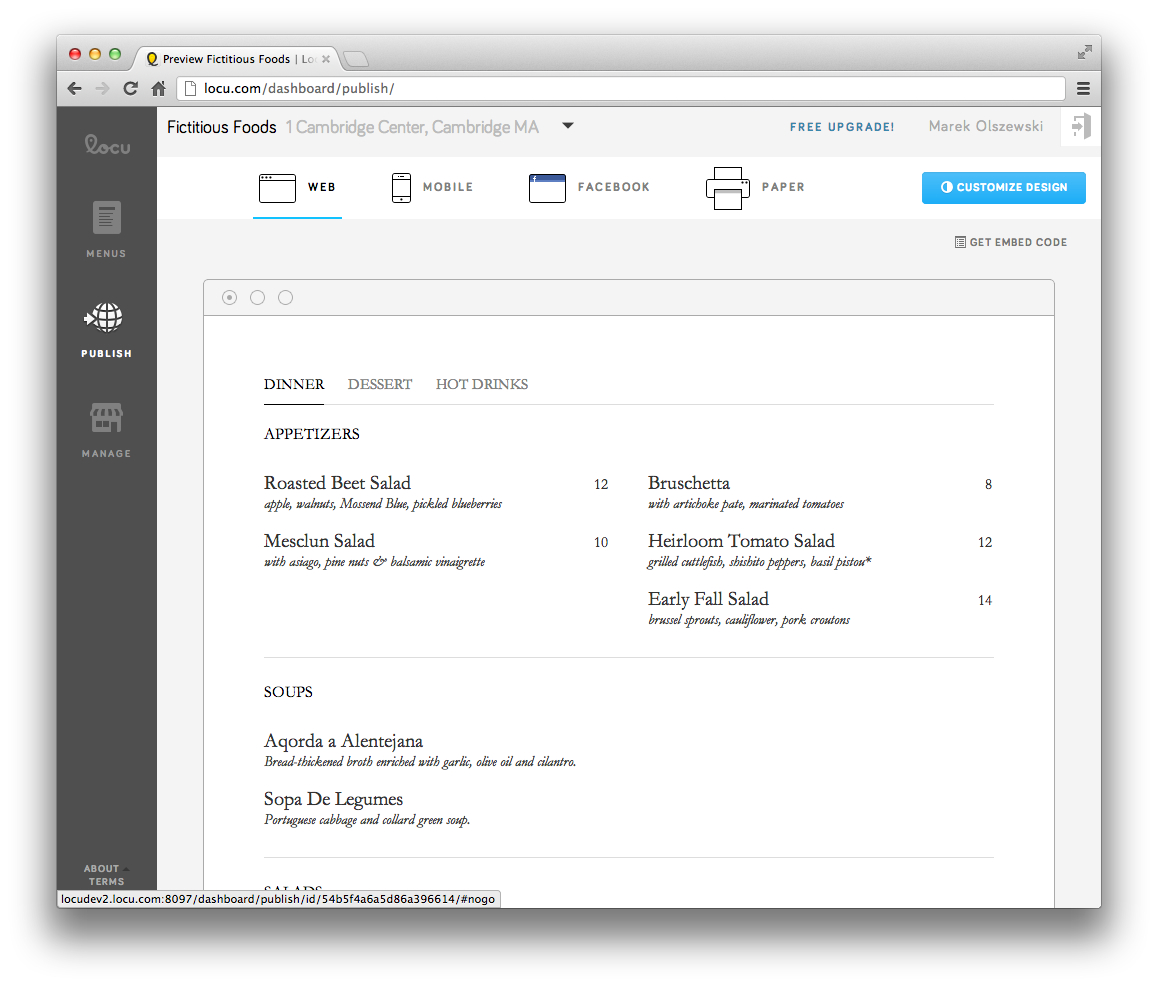 To that end, Locu also offers tools that helps the business publish their menus and price lists to their sites. They’ve added a new gallery of templates which can be customized. “It’s very similar, conceptually, to Tumblr and Mailchimp, where you have  a library of templates that can be customized, but you can build your own. You can add pictures, add multi-columns, and add a lot of other features,” explains Reinsberg. “We felt that it’s really important to give merchants the ability, at a very low cost, to replicate what previously would have been a pretty long process working with a designer,” he adds. The templates are customizable, allowing business owners to perfectly blend them into their own sites, as you can see in examples here, here and here.

In the event that Locu hasn’t already generated the business data for the customer signing up, it will immediately do so with a quick turnaround.

The service is being made available for free to business owners, with additional support offered at $25/month (or $19/mo. if paying for a year upfront). Custom solutions are also available upon request.

Since raising its Series A, Locu has grown its company to just under 20 people and has offices in San Francisco, in addition to its Boston home. Most of the hires have been on the engineering side, but they’re now starting to hire on the business side as well.