A new study from Pew Research claims that the more devices we use, the more news we consume. In fact, rather than splitting the time spent consuming news between, say, a smartphone and a tablet, most users who own both devices tend to double the amount of time spent reading the news.

According to the report, which was based on a survey of 9,513 U.S. adults conducted from June-August 2012, tablet owners in particular tend to read more in-depth news pieces, using their slate most in the hours before and after work.

And of course, smartphone ownership has gone from 35 percent in May 2011 to 44 percent. 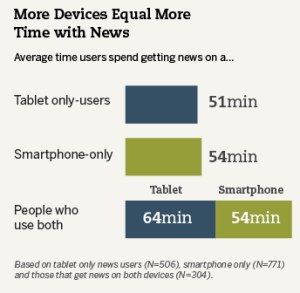 Almost half (43 percent) of tablet owners say they are consuming more news after getting a tablet, and 31 percent say they look at new sources for news and spend more time reading the news.

Because of this hunger for news, we are more concerned with getting our news from trusted publications. Sixty percent of readers who consume longer articles only read them from a select group of trusted news sources, whereas only 39 percent will read long-form articles from various sources.