Some developers are complaining that since the introduction of the Chomp-inspired App Store redesign in iOS 6, sales have noticeably dropped. Others say the changes are good for indie developers. Is the new iOS App Store a step forward or step back for mobile app developers, users, and the app economy?

Whichever side you’re on, there are a number of reasons why developers are feeling the effects. In the new iOS App Store, the user interface encourages a slower search method (flipping through cards, not scrolling through vertical lists). Less attention is given to new releases and category-based “Genius” recommendations are given a higher billing. What’s more, App Store SEO (ASO) is basically a black box that no one seems to understand.

It’s difficult to parse the legitimate gripes about user interface and its subsequent impact on the long tail app developer community, but from the complaints arising from second-rate developers we know that less popular apps have lost ground and visibility. But there are still some things which developers should be aware of, whether or not they agree the changes.

1) The Shift To Horizontal Scrolling And Cards 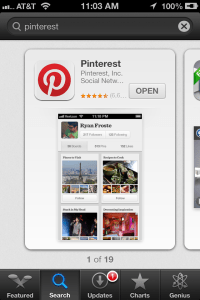 The most noticeable, and also most critical, change is the way users are meant to navigate through search results. Before, apps would be presented in a list view, with five items visible per page, and the ability to quickly scroll down through the first 25 results for that search before having to tap to load more.

Now, search results display one card (one app) at a time on iPhone. You’ll see the title, developer, rating, and a screenshot. Having an interface shown in this way means users will tire of scrolling through results much more quickly than before. If an app is at the bottom of rankings, it may never be seen.

Developers not raking highly in charts and search results will have to spend more time working on keywords to make sure they’re picking up users from very specific, targeted search queries. This is important because, with the new layout, users are likely to spend less time searching through search results and will soon learn to type in specific keywords to find what they need.

Under-the-radar developers will also need to focus on marketing and social promotion as tools to get the word out. In addition, the app’s first screenshot needs to showcase the best view of their app, because the new visual-centric interface now encourages users to buy based on sight, not details. This is now an app’s biggest selling point so choose it wisely. 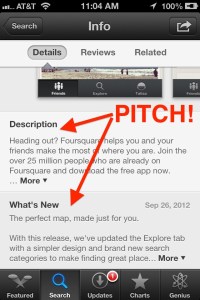 For users who tap to view more info about an app, the first bit of text they’ll see which describes what the app actually does is right below the screenshot. That means developers have but a few of lines to really hone their pitch and capture user’s interest. Think Twitter pitch, not blog post.

While it’s still important to have a good, well-written description that talks about all an app’s features, many users are going to be buying based on the screenshot and the handful of words they read there in the truncated description. In fact, users just taking a quick glance are now more likely to read the “What’s New” update information which appears just below the short description, than they are to tap the “Read More” link to read the rest of the description in detail. Developers can use this to their advantage, however, by filling out the “What’s New” section with enticing details about upgraded features, rather than simply writing “bug fixes,” for example.

Another big change for developers is how apps’ names are now being truncated thanks to the new layout. While having keywords in a title may help with app search engine visibility (to what extent, only Apple knows), the practice no longer helps individual users figure out what your app does. That’s because with the new cards interface, longer app titles are cut off, leaving only the “…” where normally more of the title would display. 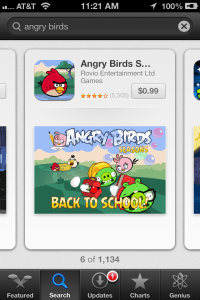 Now, to be clear, the iOS App Store has always cut off titles after some point in its various sections, but with the new card-style layout, even finding your favorite version of “Angry Birds” might be a challenge. “Angry Birds Free” fits entirely upon a search for “Angry Birds,” but “Angry Birds Space” is cut off as “Angry Birds S..” Both “Angry Birds Seasons” (regular and free) are also truncated as “Angry Birds S..” This system forces users to look at screenshots and prices, not just titles to determine whether they want the free or paid game and which version.

Developers who have several similar apps should make sure that their screenshots and the short, truncated descriptions are differentiated so as to help searchers find the right version of the application. Even if it’s just the difference between the free and pro versions of the app, using a screenshot that shows off a key pro feature as the lead image could help users make the right choice. 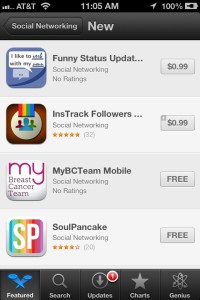 Another change involves the list of New Releases, something many indie and new developers once relied on for exposure, especially if they didn’t end up making the top rankings and other featured lists within the store. Previously, when browsing by category, you would see Paid, Free and New Releases lists side by side. Now, when you’re in the “Charts” section, you’ll see Paid, Free, and Top Grossing instead. Meanwhile, the “new” apps are listed over in the “Featured” section, under their respective category. Here, you’ll find the Paid and Free Charts, as well as the “What’s Hot” list and a section called “New.”

But here’s the kicker – that “New” section doesn’t appear to be a comprehensive list of all the apps streaming into that section. No longer are the apps timestamped by their arrival date, either. Instead, the section seems to include a hand-picked (or maybe algorithmically picked?) curated selection of applications. In other words, developers can’t count on the release of an app to give them a quick hit of exposure – working on keywords, descriptions, marketing, social promotion and other means will take on increased importance.

As all the above sections have indicated, App Store SEO (ASO) will be increasingly important to take advantage of in order to get apps found.

Developers who have only paid a bit of attention to the techniques involved with app store SEO would do themselves a favor by learning the documented tips and tricks that are out there, and experimenting to see which work best for them. Some resources for this include Appcod.es, SearchMan, MobileDevHQ, and this handy App Store SEO cheat sheet (PDF) from Apptamin.

According to findings from AppCod.es, there have been a number of SEO changes that have been implemented since the App Store’s “Chomp” update. To summarize, these include better handling of plurals, keywords’ increased importance (now as important as the app name), a change which sees the category name now functioning as keywords, no bonuses for keyword phrases, and more. In addition, in-app purchase names don’t help much with positioning now. This is actually good news for developers whose keywords competed with spammy apps that were using in-app purchase titles to rank higher in results.

While the above slide deck is a good starting point, some of the examples are not 100% accurate. “Donut” and “Donuts” return different results (pg. 4), but the deck implies they are quite close. Also, be aware that spelling mistakes (pg. 15) for “game” (like gamo, gamr, gamw) give different results, too.

Although it can be a challenge to get the keywords right, doing so can actually mean a boost in discovery as users begin to craft more targeted search queries. For example (see below), an app that ranks low on the charts for “poker” might be in the number one position for “poker casino.”

The iOS App Store change is about Apple teaching users how to search and discover new apps. With some 600,000+ apps in the store, it’s unsustainable to have users browsing through category lists.