Fuze Network, a payments technology company based in Salt Lake City, Utah, has raised $2.5 million in Series A financing, according to a new SEC filing. The round was led by Dana Stalder at Matrix Partners and Meyer Malka, founder of Bling Nation and co-founder of Lemon, Inc., now of Ribbit Capital.

Fuze Network is made up of veterans from the payments industry who are looking to build a payment solution that will make bill payments easier for billers, retailers and customers. CEO Dave Wilkes previously headed up strategic alliances at Galileo Processing, and was SVP of Sales & Marketing at ProPay. Chief Network Officer Khalid El-Awady, meanwhile, previously managed Visa’s prepaid reload network and its relationships with load partners like 7-Eleven, Speedway, and others.

At Fuze Network, the team is targeting the demographic who prefers to pay with cash. Wilkes bristles at calling these customers the “unbanked” or “under-banked,” however, despite the typical positioning that the cash-preferred customer is, in fact, under-banked. (Ahem, glances at headline. Also this.) “It’s the dumbest term I’ve ever heard,” he exclaims, “it’s not even true. Every customer that we see on our platform has a card, and multiple cards,” he says. He explains that even customers who carry prepaid cards have, on average, 3.2 other cards in his or her wallet.

What Fuze Network has built is a proprietary network that allows them to facilitate a credit to any card for a consumer. It’s basically the opposite of the “cash back” option on today’s point-of-sale terminals. Part of this network includes a product called Swipe2Pay, introduced at last fall’s Finovate conference, which lets any retailer with a POS terminal process a cash payment for any credit card, deposit money to a debit card, or load up a prepaid card without having to make changes to their existing POS infrastructure. 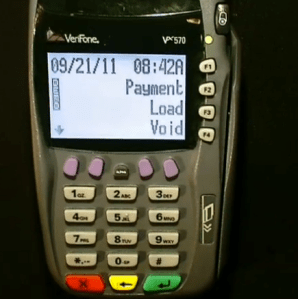 But Wilkes explains that even a POS is not required to use Fuze Network technology. He explained that even a company like Square (not a partner, just an example) could integrate with the network, despite not having traditional POS infrastructure. Instead of connecting a Square account to a bank account, and then waiting a few days while the ACH payment cleared to have access to the money, the Square user could swipe a card, like a debit card or prepaid card, and have the money from their Square account immediately transferred and made available for use.

Supporting this network are a number of other products, like Fuze’s BillPay Card (pictured above), which lets customers make in-store cash payments for any bill or subscription, like satellite TV and internet, utility bills, credit card bills and more. It’s not a credit card, debit card, or prepaid card, but more like a customer identity card. Fuze Network works with the biller to identify its cash-paying customers, then mails out the card with easy-to-follow instructions on how it can be used. Other products include tools that help customers find walk-up payment locations (Where2Pay), places to load prepaid cards (Where2Load), bank and ATM finders (Cash Locator), and FuzeFlow, Fuze’s online platform for processing bank bill payments, BillPay card reloads and more.

Founded in 2009, Fuze Network allows now customers to make payments at 17,000 banks and 100,000 retail locations nationwide. The company currently processes over $25 million per month, and does over 300,000 card transactions (credits onto card accounts) per month.

We reached out to the company via email and phone earlier today to confirm the investment, but no one was available to talk, we were told. If more details become available, we’ll update.

UPDATE, 5:45 PM ET: The company responded with more details about the round and the technology itself, and this post has been modified from the original to include the details. Most notably, Matrix and Ribbit’s involvement was not indicated by the SEC filing, and has been added. 6:23 PM ET: Full list of seed investors provided by the company and added.