FarmVille 2 is Zynga’s second go at milking as much filthy lucre from its farm-based social gaming franchise as possible. There’s no mystery to its existence. The franchise has been a runaway hit for years, and continues to be the top revenue-generating game for the company — despite being more weather-beaten cockerel than spring chicken these days (user numbers have certainly declined since its 2009/2010 heyday).

Still, FarmVille accounted for almost a third (29%) of Zynga’s online gaming revenue in the six months ending June 30, beating its newer urban-themed game CityVille (which accounted for 15%). A sequel to extend the life of the FarmVille cash-cow was inevitable. And lo and behold, earlier this month FarmVille 2 finally opened its stable doors for business — with another bucolic dose of country life. Here be gently rolling hills, neatly tilled patches of ludicrously fecund earth, chickens, goats, cows, horses, you name it.

But actually there’s something missing from this picture. Where are all the pigs?

Apart from one single, doe-eyed specimen, lurking in the corner of a ‘Coming Soon’ graphic posted to the FarmVille 2 Facebook page back in June, we haven’t been able to find any swine at all.

We’re not exhaustive players of FarmVille 2 — so we’re prepared to admit we might be wrong. We’ve reached out to Zynga to ask about the FarmVille 2 Aporkalypse, as we’re terming it (either that or ‘Piggygate’), and will update when we hear back. 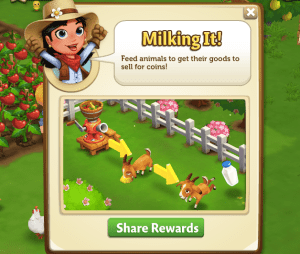 This is not the first time we’ve noticed something missing from one of Zynga’s realities. Last year disappearing wedding chapels in CityVille caught our eye. In that instance the chapels had actually appeared in the game before undergoing a not-so-subtle transformation into anodyne ‘wedding halls’ (“with two gold ring things that somehow makes me think only of McDonald’s”, as TC founder Michael Arrington put it.)

Continuing the religious correctness theme, we’re speculating FarmVille 2’s missing pigs could be explained by it being Zynga’s first game localised for the Middle East and North Africa — a region where pork isn’t, you know, popular.

An alternative wildcard theory could be that Rovio’s Angry Birds — and now also Bad Piggies — have all but trademarked porcine gaming characters. You could say Rovio’s smug, thieving pigs are hogging all the limelight right now…